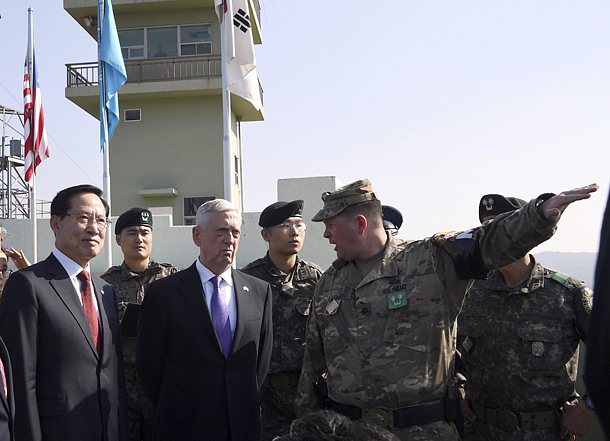 Standing at the world’s most heavily fortified border, separating the two Koreas, the top U.S. defense official said Friday that the United States is not seeking a war but a diplomatic resolution to the North Korean nuclear crisis.

“As Secretary of State [Rex] Tillerson has made clear, our goal is not war, but rather the complete, verifiable, and irreversible denuclearization of the Korean peninsula,” U.S. Defense Secretary Jim Mattis said during his visit to the demilitarized zone (DMZ). Mattis arrived in South Korea earlier in the day for an annual security consultation with top defense officials in Seoul, and his first destination was the Truce Village of Panmunjeom in the Joint Security Area (JSA) of the DMZ, where North and South Korean forces stand face-to-face.

After inspecting the JSA with South Korean Defense Minister Song Young-moo, Mattis addressed reporters in front of House of Freedom on the southern side.

“North Korean provocations continue to threaten regional and world peace,” he said, calling Pyongyang “an oppressive regime that shackles its people, denying their freedom, their welfare and their human dignity in pursuit of nuclear weapons and their means of delivery in order to threaten others with catastrophe.”

He recalled his meeting earlier in the week with Song in the Philippines on the sidelines of the Association of Southeast Asian Nations (Asean) security forum.

“Two days ago at the Asean meeting we made clear our mutual commitment to a diplomatic solution to address North Korea’s reckless, outlaw behavior,” Mattis said. “We stand shoulder-to-shoulder with you, with your soldiers and with your people in confronting the threat posed by the Kim Jong-un regime.”

He also said the United States will maintain its firm military defense posture to protect peace and stability of the peninsula and democratic values of the two countries.

Song said the North must stop reckless provocations and respond to the South’s proposal to resume inter-Korean talks as soon as possible. “The nuclear arms and missiles being developed by the North are weapons that cannot be used,” Song said. “If they use them, I assure that they will face a retaliation by the strong allied capabilities of South Korea and the United States.” He also said the visit to the JSA demonstrated the ironclad cooperation between the two countries.

Mattis, who took office in January, made his first trip to South Korea in February but he did not visit the JSA at the time.

Song and Mattis also visited Observation Post Ouellette, 25 meters (82 feet) away from the military demarcation line, and peered into the North. According to the Ministry of National Defense, Song gave Mattis a brief history of battles fought near the Imjin River during the Korean War on their way to the observation post.

As the defense chiefs of South Korea and the United States appeared in the JSA, North Korean soldiers made busy movements. Some approached the inter-Korean border and observed the group from about 10 meters away.

In a show of force, Mattis arrived in Korea on an E-4B, also known as the Doomsday plane for its ability to communicate and remain airborne in the event of a nuclear war.

Mattis’ trip is a prelude to U.S. President Donald Trump’s visit to Korea next month. Starting Nov. 3, Trump will tour five countries in Asia and he will visit Korea on Nov. 7 and 8.

“Mattis was warning the North not to make a reckless move ahead of Trump’s trip,” Kim Hyun-wook, a professor at the Korea National Diplomatic Academy. “He was also stressing one more time that the United States wants to resolve the nuclear crisis through diplomatic means.”

Later in the afternoon, Mattis visited the Blue House and met with President Moon Jae-in. “The latest U.S. deployment of strategic assets to the Korean Peninsula has worked as an extremely powerful and effective deterrence against the North’s provocations,” Moon said during their meeting. “I appreciate the measure because it brings hope to many Korean people who are worrying about the security crisis.”

Mattis is scheduled to meet with top Korean military leaders, including Defense Minister Song, today at the annual Security Consultative Meeting. In addition to the North Korean crisis, follow-up measures for an earlier agreement between Moon and Trump on the U.S. handover of wartime operational control to Korea will be discussed.

Meanwhile, top generals of Seoul and Washington held a Military Committee Meeting in Seoul on Friday. Jeong Kyeong-doo, chairman of the South Korean Joint Chiefs of Staff, and his U.S. counterpart Joseph Dunford agreed to “continuously develop effective response measures in order to deter, and if necessary, firmly respond to additional provocation” from the North.