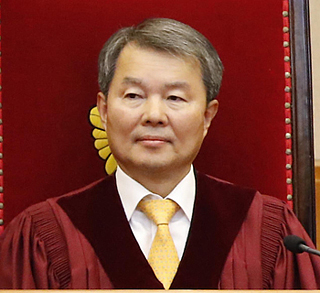 President Moon Jae-in on Friday named a new nominee for the chief justice of the Constitutional Court, his second nomination for the head of the top court since taking office in May.

Lee Jin-sung, an incumbent justice of the court, has been tapped to head the Constitutional Court, according to the presidential office Blue House.

The nomination comes over a month after the opposition-led parliament voted down Moon’s earlier nominee, Justice Kim Yi-su.

Kim currently serves as acting chief of the Constitutional Court. The post has been vacant since former Chief Justice Park Han-chul retired in January.

“Justice Lee is considered the right person for the job as he has remained faithful to the duties of the Constitutional Court, consistently issuing opinions that seek to protect the people’s rights from the abuse of power,” presidential spokesman Park Soo-hyun told a press briefing.

“Also, he is the most senior justice next to Justice Kim Yi-su.”

Still, Lee’s nomination apparently comes as a surprise to many as the presidential office earlier cited a need to address the issue of the new court chief’s term length.

The Blue House earlier insisted a new chief justice should receive another six-year term following his or her appointment, while the opposition parties argued the new court chief should only serve the remainder of his or her original six-year term as a justice. Only a Constitutional Court justice can be appointed the chief justice under the current law.

A Blue House official said Lee, even if appointed, will have to step down in September 2018, meaning the president will have to find his replacement in less than a year.

“[The president] designated the best nominee he can under the current condition as we cannot continue to have the seat vacant,” the official said, while speaking on condition of anonymity.

A new chief justice must undergo a confirmation hearing by the parliament and also win parliamentary approval for appointment.