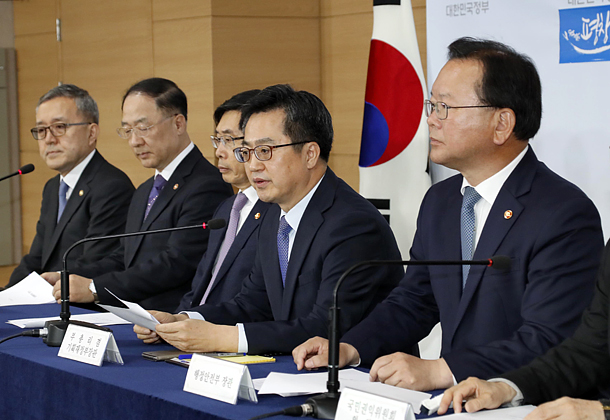 Deputy Prime Minister Kim Dong-yeon, second from right, announces the government’s probe into hiring at public institutions during a press briefing at the Gwanghwamun government complex in central Seoul on Friday. [YONHAP]

The government announced Friday it will look into all recruitment decisions made by public corporations amidst snowballing suspicions that favoritism and corruption are rampant in the hiring process.

The authorities will look into hiring at nearly 1,100 state-run institutions and government entities over the past five years.

The measure was announced following a meeting presided over by Deputy Prime Minister Kim Dong-yeon and attended by 12 other heads of ministries and senior officials early Friday.

“Those found to have been involved in illicit job favors will face heavy punishments such as immediate dismissals regardless of one’s position in the company,” said the deputy prime minister following the meeting at the Gwanghwamun government complex in central Seoul.

Kim, who also serves as finance minister, said the government was determined to weed out hanky-panky in hiring at a time of youth unemployment. Job creation for the young is supposed to be a top priority for the Moon Jae-in administration.

“On behalf of many job seekers and their families, the government will do its best to end illicit employment,” he proclaimed.

According to Statistics Korea, the youth unemployment rate in August hit 9.4 percent, the highest August figure since 1999. The rate fell slightly last month to 9.2 percent, but it has yet to budge substantially during Moon’s presidency.

The government said it will apply a “one-strike out” principle. Anyone found to be involved in favoritism or corruption in recruitment - whether it be the employer or employee - will face dismissal on principle.

A total of 1,089 public entities will be put under the microscope. The authorities will also crack down on illicit employment that occurred more than five years ago if it is reported.

The measure came after a series of reports shed light on powerful figures using their influence to place their acquaintances in public companies and state-run institutions, which can be well-paid jobs with high job security.

The government said suspicions raised by these reports were “more than just a matter of fairness” and were “spurring public outrage.”

A close look will be taken at Kangwon Land, the public company that runs the only casino in Korea open to Koreans. An internal audit of the company revealed that 493 out of 518 employees recruited in 2012 and 2013, or 95 percent, had powerful figures help them get jobs. One of the powerful figures pulling strings was Rep. Kwon Seong-dong of the opposition Liberty Korea Party, who chairs the Assembly’s judiciary committee. Kwon reportedly used his influence to land an aide at his district office a job at the casino company in 2013.

The Financial Supervisory Service, Korea Coal Corporation, Korea Resources Corporation and Korea Institute of Design Promotion are among the state-run bodies accused of hiring people because of connections.