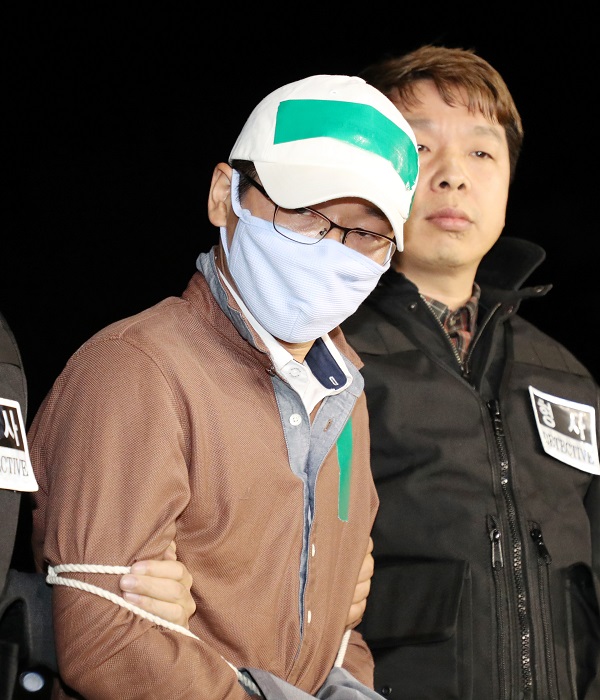 A 41-year-old man surnamed Heo, who was arrested Thursday for allegedly killing the father of online game developer NCSOFT West’s CEO Yoon Song-yee, admitted to it on Friday morning.

Yoon’s 68-year-old father left his home in Yangpyeong County, Gyeonggi, at around 5 p.m. Wednesday to attend a saxophone club meeting.
The next morning at around 7:17 a.m., his wife found him dead near the gate of the house, stabbed in the neck, and called the police. Yoon’s car was missing from the garage.

At around 11 a.m., police found Yoon’s car, parked at a lot some 5 kilometers (3 miles) from his home. They found traces of blood inside. They did not find a black box in the car.

Authorities checked CCTV footage and saw that Heo drove in a Hyundai i30 toward Yoon’s house at 5:10 p.m. Wednesday. Yoon is seen driving into the town of his home around 7:25 p.m. Heo is then seen driving Yoon’s car out of town at around 8:50 p.m.

Police followed Heo and found him driving toward Jeonju in Imsil County, North Jeolla, around 5:45 p.m. Thursday. They arrested him on site. Police said he did not resist arrest, but denied committing the crime.

But an hour or so into the interrogation on Friday, however, police said Heo admitted to killing Yoon.
“I accidentally killed the man after getting in a fight over a parking space at Yangpyeong,” he told police. Heo, a real estate consultant, said he was visiting Yangpyeong for a real estate deal.
“I was not myself at the time,” he reportedly told police. “I didn’t even check if the man was alive or dead.”

Police said they found links between Heo’s real estate consulting work and a house under construction near Yoon’s home.
They are investigating whether Heo and Yoon had any disputes over the construction.

Police also said they received testimonies from neighbors in the area that Yoon recently filed complaints against those involved in the construction, one of which reportedly concerned how the new house would block the sunlight from reaching his home.

Authorities are also leaving open the possibility that someone could have hired Heo to kill Yoon.
Yoon was a senior executive at the Korea Securities Finance Corporation and retired in 2002. He moved to Yangpyeong some 10 years ago.

Yoon Song-yee, who was in the Silicon Valley area, is reportedly on her way home after hearing the news of her father’s death.
“In moments when I get angry about things, I always recall something that my father told me,” Yoon wrote in a column on Dong-A Ilbo in 2003. “He said, ‘Wait and see — there is always a reason for everything.’”

She wrote, “That was the way my father taught me to live in this world that is so full of people who work at different paces, with different thoughts and ideas.”

Yoon graduated two years early from Seoul Science High School. Upon graduating from Korea Advanced Institute of Science and Technology, she received her Ph.D. from Massachusetts Institute of Technology in 3.5 years. She married Kim Taek-jin, president and CEO of NCSOFT Corporation, in 2008.