The Lotte Giants renewed their three-year contract with manager Cho Won-woo for 1.2 billion won ($1 million) on Thursday. A total of 18 managers have served as the Giants’ manager since it was first established in 1982, but Cho became the third manager ever to successfully renew his contract with the Giants. 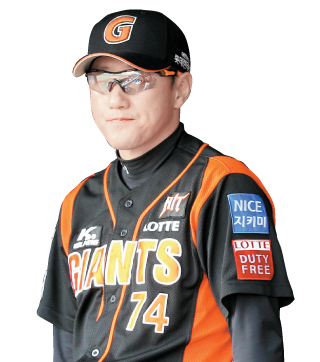 Cho, appointed as the Giants’ manager last season, has led the team to 146 wins, two ties and 140 losses. Though the Giants failed to advance to the postseason, finishing eighth in 2016, they made a comeback starting in August to finish third in 2017, heading to the playoffs for the first time in five years.

“We highly evaluated Cho’s managing ability to lead the team to the postseason for the first time in five years and set a new record for the most number of wins in a season [at 80],” said the Giants.

Up until the end of the regular season, it seemed as if Cho’s contract was going to be renewed. But after the Giants lost the fifth playoff game to the Dinos, Cho was criticized for being too easygoing about the game.

After the playoff games, the Giants continued to postpone its announcement regarding Cho’s contract, sparking rumors that the Giants were searching for a new manager. But Lee Yoon-won, general manager of the Giants, said the club has never thought of appointing a new manager and made its decision to renew the contract early in the season.

“It must have been a hard decision for the club,” Cho said. “I didn’t expect it to be three years. I got enough time to make a great team and I have a bigger responsibility.”

Despite the long history of the Giants in the KBO, the club has been known for its managers’ short-term careers. Since 1982, they’ve had a total of six interim managers. Kang Byung-chul, who led the Giants to Korean Series victories in 1984 and 1992, only served as manager for three years, from 1994 to 1986 and from 1991 to 1993.

Now that Cho has been given three more years, he can start negotiating with the free agents. This year, the Giants’ key players - Kang Min-ho, Son Ah-seop, Choi Joon-suk and Jeon Jun-woo - became free agents. In addition, the Giants needs to negotiate their renewal with foreign players and the return of Hwang Jae-gyun needs to be figured out.

“Nothing has been finalized,” Cho said. “There’s a direction in which the club is heading. So this is something I’ll have to communicate with the players.”

If Cho fulfills the next three years, he will be the team’s longest-running manager, exceeding Kim Yong-hee, who managed the Giants from November 1993 to June 1998.

After a runner-up finish in the Korean Series in 1995, Kim successfully renewed his three-year contract with the Giants, but due to their struggle in 1998, Kim left without fulfilling five seasons. Before Cho’s renewal, Kim Myung-sung was the last manager to renew his contract, but he died of a heart attack in 2001.

Jerry Loyster, who led the team to the postseason for three consecutive years from 2008 to 2010, left after his 2-plus-one year contract.