SNAG founder wants to do more than teach golf

SNAG founder wants to do more than teach golf

Seventeen years ago, American golfer Terry Anton created a way for people to play golf without having to spend a fortune on equipment or golf course membership fees. 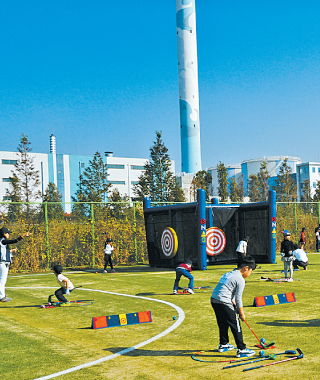 A photo of a SNAG tournament at Gang Uk-sun Golf Academy in Ansan on Saturday. [KOREA SNAG GOLF ASSOCIATION]

He named his new system Starting New at Golf, or SNAG.

Anton was the youngest golfer at the time to qualify for a PGA Tour event at age 17, having spent two years as a PGA Tour professional and being one of the founders of the American Junior Golf Association (AJGA).

“The biggest challenge I believe in golf is we move people to a traditional golf experience before they are ever, ever ready to be there,” Anton said. “And when they don’t experience success, they’re gone. Kids in today’s world, if we don’t do it right, there are so many other things in life they can do because in golf, there’s no reset button that the video games have.”


SNAG Golf, which was introduced in 2000, focuses on simple, structured instruction for new learners and a modified form of golf that allows learners to play in non-traditional venues.

In the United States, over 10,000 schools now use SNAG Golf as part of their physical education curricula, as well as more than five million students worldwide.

The first thing Anton set upon was how to correct an improper grip. Anton said, “My goal is to make them transition from the five-sided grip to the two-sided grip and to one round grip.” 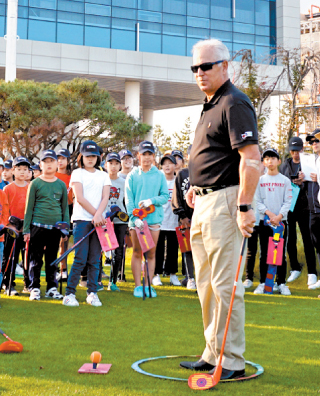 Anton also teaches students how to put a backspin on a chip shot from day one, with a bullseye on the face of the club, a black dot on the back of the ball and an arrow on top of it pointing towards the target.

The club, also called the launcher, has the loft of an 8 iron.

This allows kids to learn, even on shorter shots, how to hit more gently.

The choice of using an 8 iron also came from asking Tour players, “what was your first set?” at Onion Creek in Western Texas, where the Senior Tour started.

“The best players learned with an 8 iron,” Anton said. “I needed to follow suit with that. Because if I do, someone will learn how to articulate their hands better.”

“Three out of four are inside 50 yards,” Anton said. “So from day one, I’m teaching everybody the short game.”

Recently in Japan, the country saw its youngest female amateur to win a national tournament at age 17, Nasa Hataoka, who started the sport by playing SNAG.

“I think what I’d like to see is,” Anton said, “especially this culture being golf-crazy, putting money into schools, and the schools then having SNAG events, getting the kids that are most talented and making world champions.”

With the hope of getting SNAG in Korean schools and around the world, he hopes to keep people playing golf by providing a family-oriented environment.

The Korea SNAG Golf Association was established in 2011, with a goal of popularizing golf here.

MFM is a website through which teams of 12 children and a coach can interact and schedule matches with other teams anywhere in the world.

The website allows both coaches and players to communicate with each other through SNAG Chat, which translates languages.

It costs $100 to play ten matches, and for every hole that gets played in a match, one meal will be donated to Feed My Starving Children, a non-profit organization.

In addition, MFM has a contract with 400 U.S. private colleges and universities to provide tuition discounts for each year of MFM participation.

Anton hopes to contract with a lot more colleges globally and, once again, provide more opportunities.

“I want to teach social responsibility to kids,” Anton said. “No matter how bad you think you’re doing, you just gave a meal today.”

He added, “You have new friends all over the world that you’re texting and communicating with.”