How to deal with Trump

How to deal with Trump 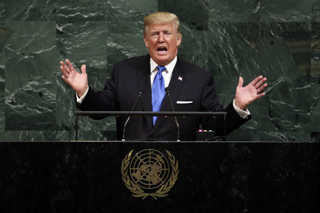 The rhetoric between the United States and North Korea is dangerous. With the unprecedented verbal attacks by leaders happening almost everyday, military clashes can hardly be ruled out. The source of the problem is North Korea’s attempts to change the security structure of the Korean Peninsula with nuclear armament and missile provocations.

But since North Korea is hopeless, we want to keep the United States from doing something extreme. As we are the ones who will suffer the most if a war breaks out, we need to simply prevent the worst possible scenario. As we have successfully made a peaceful regime change with candlelight protests, we have a social atmosphere where change is possible. For peace, some may ask the government to risk going against the United States.

This is the overall atmosphere before Trump’s visit to Seoul. The government has been making policy decisions that lie somewhere between international trends and the calls of domestic supporters. As a result, the Moon Jae-in administration is in an awkward position to keep the relationship with America while maintaining its base calling for peace.

But if we choose that path, things will get more complicated. The continental U.S. is now within the range of North Korean nuclear threats. Historically, the United States has overreacted when it is threatened. In Washington, Trump, who advocates America First, is the decision maker. Japan, Australia and even China are all treating Trump carefully.

Some argue that those countries are different than Korea, which will surely experience devastation if a war breaks out. But can U.S. actions be controlled if we strongly pursue peace? It may be possible if we have sufficient trust with the United States. Then, how about the confidence and relationship today? It may not be solid enough to oppose Washington. Instead, Trump may think that the United States is making efforts to defend South Korea from North Korea’s provocations, but Korea is focusing on its own interests. As Seoul-Beijing relations are also strained, China could also work against South Korea. Pyongyang won’t miss the opportunity either.

I don’t mean to say that South Korea should follow the United States and risk a war. Our goal is not war or peace but a more complex combination of preventing a war, checking on provocations and holding talks. So, we need to act accordingly. As the government has been contemplating strategies, I hope to create policy that is a mix of the demands of the United States and the expectations of Moon’s supporters to fit our complex goals and use the frame when talking to the United States rather than making physical approaches for each decision. Before consulting the United States, the following needs to be done first.

First, we need to build more trust and secure room for persuasion. Basically, South Korea is an ally that does not avoid mutual threats and has the intention to do its part. Moreover, we need to deal with a peculiar leader like Trump with pragmatism — in other words, without ethical judgment or personal preference.

Second, we need to make efforts to dissuade Trump from taking an extreme path while reinforcing cooperation. Trump’s hard-line stance is actually effective in deterring North Korea and engaging China despite its risky nature. It is well known that Trump likes to get recognition and is sensitive about criticism.

In conclusion, Trump’s responses need to be toned down, but South Korea does not have enough assets to go against Washington at the moment. This is the best we can do for now as the Moon administration has had little time to restore diplomacy with Washington. When you don’t know your enemy and yourself, you may end up in a more challenging situation.

*The author, a former Korean ambassador to Russia, is a visiting professor at Seoul National University.