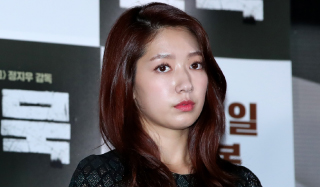 Park Shin-hye at the press preview for the movie “Heart Blackened” at the CGV Yongsan I-Park Mall in central Seoul on Tuesday. In the courtroom drama, which will be released on Thursday, she plays the role of lawyer Choi Hee-jung. [YONHAP]

In the 2012 box-office smash comedy “Miracle in Cell No. 7,” Park Shin-hye played her first-ever lawyer role as the grown-up Ye-seung, who helps vindicate her mentally retarded father from the false charges of raping and killing a young girl.

The actress returned to the same occupation with the forthcoming courtroom film “Heart Blackened” about a business tycoon who struggles to clear his only daughter of the suspicion of killing his top-star singer fiance. Park plays Choi Hee-jung, the lawyer who defends the daughter in the murder trial.

“It wasn’t easy because it was my first role as a lawyer in a long time,” Park said during an interview with Yonhap News Agency at a cafe in central Seoul on Thursday. “While there was clear evidence that the dad was innocent in ‘Miracle,’ in ‘Heart Blackened,’ I was in a situation of ‘having to’ prove somebody’s innocence. So when I stood trial as Hee-jung, things felt awkward and unfamiliar for me.”

The 27-year-old actress has played a wide range of professions in big and small screens from doctor and journalist to judo coach, building an image as a smart and confident girl. But she said no when asked if her personality in real life is the same. “In fact, I’m a wishy-washy person,” she said.

“Whatever work I do, I tend to do it fast and accurately, but when it comes to fields that I don’t know about well, I prefer to just listen. However, since I’m an inquisitive person, I like looking for how-to knowledge on everything and life tips.”

Park says her new film will keep viewers constantly guessing with multiple twists and turns. And in the end, they might feel like being stabbed in the back, “just like when they found out that the answer they thought was right was in fact wrong.”

Debuting as a child actor at age 13 with her appearance in the music video of singer Lee Seung-hwan’s “Flower” in 2003, she gained fame for playing the childhood years of the lead actress Choi Ji-woo’s character in the SBS TV series “Stairway to Heaven.” Park later co-starred in the TV series “You’re Beautiful” with Jang Keun-suk and appeared in the 2012 film “Miracle in Cell No. 7.” She rose to international stardom for her lead roles in the TV series “Heirs” and “Pinocchio.” These days she makes four to five trips a year to other Asian countries like Singapore, Thailand, the Philippines and Taiwan, to meet her international fans.

“I was surprised to see so many fans recognized me when I visited Japan on a personal trip,” she said. “I think fans like me because of my healthy, bright and cheerful energy.”

The actress singled out her “blandness” as her strong point.

“I do not actually have a strong nose, a sharp jaw line or a model’s body shape, you know. I’m not glamorous and a bit bland, but I think that’s my strength,” she said. “That may be a reason behind what people say is my good chemistry with many actors.”