Pepper is good for a laugh, less so for banking

Pepper is good for a laugh, less so for banking 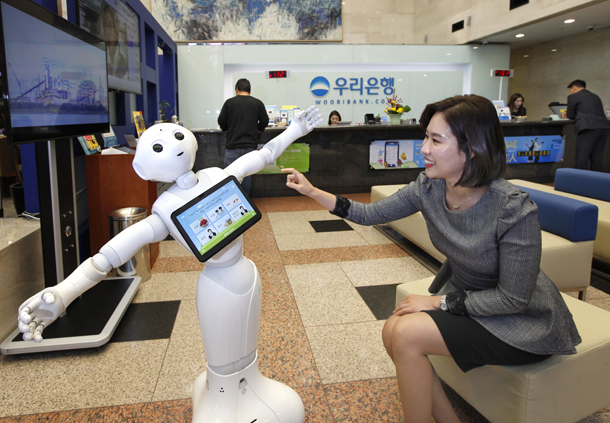 A Woori Bank employee interacts with a Pepper robot on Oct. 20 in the bank’s headquarters in central Seoul. [PARK SANG-MOON]

The lobby of Woori Bank’s flagship branch in central Seoul used to be a quiet and orderly place, with an LED notice board calling up customers by number.

The silence was broken on Oct. 20, as customers burst into fits of giggles when a humanoid robot started pulling off some entertaining dance moves.

Pepper, a robot made by SoftBank, embodies the finance industry’s drive to embrace technology in its customer services, offering a snapshot of what future branches will look like.

While the four-foot-tall machine was excellent at entertaining people, its customer service and ability to understand what people were saying to it were sadly lacking.

As customers approach, Pepper stops dancing and switches on its tablet display.

The product recommendation function is the only feature that is really specifically related to banking. Pepper is able to suggest financial products to customers, depending on age and usage.

But you should not expect the robot to be as specific as its human counterparts.

Age is split into three broad groups - 20s, 30s and 40s, 50s and 60s - and the options for usage are limited: Customers looking for insurance are only presented with three categories.

Even if the user is able to put in the right information, Pepper only suggests a product category. It is not able to recommend a specific Woori Bank product.

“It is mainly designed to substitute part of the bank teller’s role,” said Lee Jin-woo, senior manager of the digital banking strategy department at Woori.

Another anticipated feature was “Ask Pepper,” which uses voice recognition to respond to customers questions.

In order to access the function, users first have to address the robot by name. If Pepper replies “yes,” it’s ready to answer questions.

But the way it answers is primarily based on Wikipedia entries, making responses disjointed and often irrelevant.

When a reporter asked “How is today’s Kospi,” Pepper started to read out the definition of “Kospi.”

Its language abilities are also disappointing, as it sometimes misunderstands what people are saying.

One passerby asked about nalssi, a Korean word for the weather, but it misunderstood the word as aissi, a kind of a slang.

But when it comes to keeping people entertained, Pepper seems to have the edge over the bank’s tellers.

Pepper charms users with its “guess the age” game, where it invariably guesses the customer is younger than they actually are. In the reporter’s case it guessed fifteen, almost half her actual age.

It’s also a master of selfies, pulling out different poses and displaying messages on its tablet screen like “Cheer up.”

Still, the senior manager said that Pepper is not yet able to read people’s emotions, which is one of its highly anticipated functions.

“We are now testing the robot and the function can be upgraded later,” Lee said.

The bank said that it will pilot the robot for one year at its headquarters, Myeongdong, central Seoul and Yeouido, western Seoul branches.

Woori Bank is not the only place customers can find Pepper. The plucky robot has been popping up across Seoul in retail stores and hospitals including Kyobo Book, Gachon University Gil Medical Center, Lotte Department Store and Emart, as well as other venues across the country.