Views from the Party Congress

Views from the Party Congress 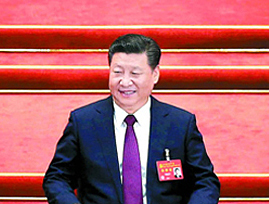 “Raise your hands if you agree to the revision of the Constitution of the Chinese Communist Party,” said Xi Jinping, and 2,300 party representatives raised their right hands at once.

“Raise your hands if you disagree.” Meiyou, or “None” was repeated six times by the counter. Xi confirmed, “Meiyou.”

It was the moment that “Xi Jinping Thought for the New Era of Socialism with Chinese Special Characteristics,” or “Xi Jinping Thought,” was enshrined in the Chinese Constitution on the second floor of the Great Hall of the People in Beijing on Oct. 24.

The Party Congress is the biggest political event in China. As the descendant of the Kremlin, the congress is a strictly closed-door event.

I watched as many open meetings as possible, trying to read the facial expressions of Chinese leaders.

They didn’t reveal their feelings. I only noticed that former Premier Zhu Rongji did not clap as Xi stood at the podium.

There was little surprise. Xi Jinping Thought is complete, and there is no successor. All members of the Politburo Standing Committee were in attendance.

The 19th National Congress brought the 89 million Communist Party members together with three-part visions for 2020, 2035 and the mid-21st century. The methodologies were also meticulous.

As I covered the Party Congress, I learned three things.

First, system competition has returned. Last year, Xi said history has no conclusion and there is no chance of ending. He described an ideal society where the great way is implemented and the world will belong to everyone. He also promised assistance to developing and underdeveloped countries with the One Road, One Belt project and a new type of international relations.

The second is the power of organization. In the closed-door meeting, the debates among Xi’s faction, the Communist Youth League of China and Shanghai clique were not made public. In the end, leaders became one as they emerged from the meeting room. They were all “China clique.”

Third, Korea needs to make more efforts. Diplomacy beyond the members of the Politburo Standing Committee and the Politburo is urgent.

At the 15th Congress 20 years ago, 44-year-old Xi became a member of the Central Committee with the lowest number of votes among the 151 elected members. The 49-year-old Wang Qishan was elected, but came in at 145th. Then, 15 years later, they became the most powerful leaders in China.