As coding education nears, a call for creativity

As coding education nears, a call for creativity 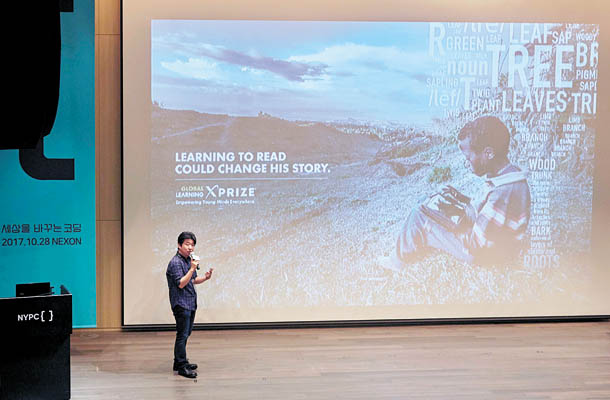 As computer programming is set to become a part of school curricula across the nation starting next year, industry insiders and experts are calling for a system that emphasizes creative thinking more than rote learning.

“Programming is often considered similar to mathematics but math education in Korea puts more weight on how to solve a given problem as quickly as possible without making mistakes rather than learning to think logically based on the fundamental principles of the subject,” said Ha Jae-seung, a software engineer and senior researcher at Nexon, Korea’s leading online game publisher at a press conference for the Nexon Youth Programming Challenge. The annual coding competition for elementary, middle and high school students in Korea took place at the company’s headquarters in Pangyo, Gyeonggi on Saturday.

“I hope programming education focuses more on the process of problem solving and logical thinking instead of results and scores,” he added.

After the government designated coding as a compulsory subject for local middle and high schools, the number of students attending after-school private classes to get an early start on the subject is on the rise.

But experts such as Ha worry that being thrown into programming without first being interested in the field may undermine the students’ potential as well as the merits of the subject.

“Coding should not be treated as a subject where students simply make computer programs,” said Park Yi-sun, a director at Nexon’s corporate social responsibility division during the press conference. “Rather, it should be able to rear creativity and logical thinking among students. The education system should be designed in such a way that students can experience coding through multiple channels and grow interested in the subject.”

Park explained that her company is trying to raise interest in programming among young people by hosting the competition.

While about 2,500 students participated in the event last year, the number nearly doubled with over 4,500 participants throwing their hats into the ring this year.

Lee Gun-ho, a chief engineer and co-founder of Enuma, an education technology start-up in Silicon Valley, and former developer at NCsoft, another top gaming company in Korea, also attended the event as an adviser. Lee said competitions like the Nexon Youth Programming Challenge are an ideal way to motivate students.

“I remember participating in competitions while growing up,” said Lee. “It’s important the students learn the computer languages, but even more for them to be able to use the basic knowledge and combine it with creative thinking to solve problems and create programs.”

Kim Sae-bin, a student at Gyeonggi Science High School who competed in the event on Saturday, said the element of fun is an important part of programming.

“Having fun is a driving force that allows students such as myself to do programming voluntarily,” Kim said. “It’s a time-consuming process to solve a program but it’s also fun to be able to take different approaches.”