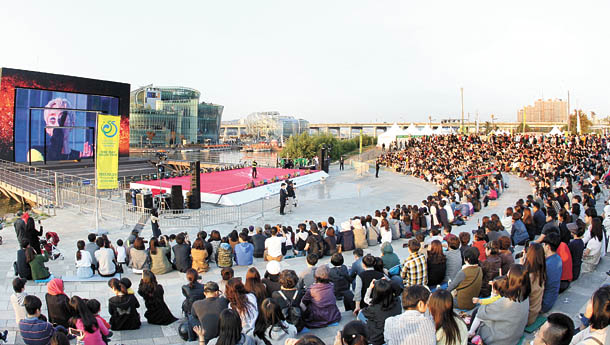 A crowd watches Zion.T perform at an event hosted by the Saudi embassy and sponsored by Korean oil refiner S-Oil to celebrate the 55 years of diplomatic ties between the countries at Banpo Hangang Park in southern Seoul on Saturday. [S-OIL]

The Kingdom of Saudi Arabia and Korea celebrated the 55th anniversary of their diplomatic ties this year through an event that presented a glimpse into the culture of Saudi Arabia over the weekend.

The event, titled “As-Salamu Alaikum,” was hosted by the Embassy of the Kingdom of Saudi Arabia and sponsored by major Korean oil refiner S-Oil, and took place on Saturday at Banpo Hangang Park, Seocho District, southern Seoul.

Along with booths for Saudi food and Arabic calligraphy, top singers from the two countries - Saudi Arabian rapper Qusai and Korean band and singer Bolbbalgan4 and Zion.T - performed their songs in front of an audience of 1,000 that included both Saudi Arabians and Koreans. A Korean at the event said she was impressed with the Saudi rapper, especially because he sang most of his songs in English rather than in Arabic, making it easier for Koreans to follow along with his performance.

“The purpose of this event [on Saturday] is to create a stage where Korean people can learn about the culture of Saudi Arabia more in depth,” said Riyadh Al-Abdulmunem, the deputy chief of mission at the Royal Embassy of Saudi Arabia in Korea.

Saudi Arabia and Korea established ambassador-level diplomatic relations on Oct. 16, 1962. The Korean embassy in Saudi Arabia opened in July the subsequent year and the Saudi embassy in Korea opened in Seoul in April 1975.

Along with various bilateral agreements, including the investment guarantee treaty signed by the two countries in 2002, S-Oil is an example of the close ties between Saudi Arabia and Korea.

Although a Korean oil refiner, the main shareholder of S-Oil is Saudi Aramco, who spent $400 million in 1991, the biggest foreign investment into Korea at the time, to buy a majority share of the company.

When asked about the economic ties between Saudi Arabia and Korea, the deputy chief said, “The connection between S-Oil and Aramco is just a tip of the iceberg and there are many other sectors where the two countries are strengthening ties.”

Last year, trade between the two countries posted over $21 billion, with Saudi’s exports to Korea, mainly crude oil, reaching $15.7 billion, while its imports from Korea, which included electronics and automobiles, stood at $5.6 billion.

“Korea is a key partner in ‘Vision 2030,’ currently the biggest economic development plan of Saudi Arabia,” the deputy chief of the embassy of Saudi Arabia noted.

Vision 2030 is an initiative by the government of Saudi Arabia to diversify the kingdom’s economic portfolio and ultimately lessen its reliance on oil exports amid falling oil prices. Korea is one of the five strategic partners in the initiative chosen by Saudi Arabia.

Other than oil and gas, Saudi Arabia and Korea hope to broaden their cooperation in sectors such as automobiles and shipbuilding.

In late 2015, Hyundai Heavy Industries, the largest shipbuilder in Korea, signed a memorandum of understanding with Aramco to build King Salman Global Maritime Industries Complex in Ras Al-Khair, Saudi Arabia, which will be the largest shipyard in the world once completed. SsangYong Motor, a Korean unit of Indian auto giant Mahindra & Mahindra, is reportedly working to build an auto manufacturing plant in Saudi Arabia in a joint effort with Saudi National Automotive Manufacturing, set to begin production in 2020.