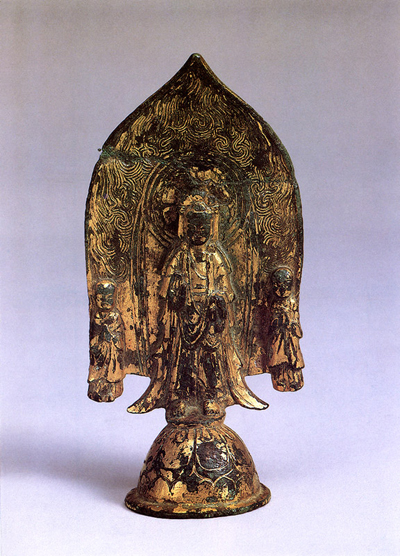 This item is said to have been found in Chuncheon, Gangwon, with a mandorla (Buddhist halo of light) laid behind the triad.

It is a unique object with the triad, a mandorla, and a pedestal in one piece. The round-faced main Bodhisattva in the center wears a crown. It shows thin underwear worn diagonally.

The two parts of the thick outer robe cross each other in the front, and then spread out at the bottom like feathers. The lower part of the robe extends down to the ankle. The right hand is raised to the shoulder, with the palm facing outward. The fingers of the left hand are pointing downward, with the ring finger and the little finger bent inward. The pedestal on which the main Bodhisattva stands displays large-sized lotus flower patterns in double lines. The image was presumed to date back to the Baekje Period (18 B.C.-A.D.660), but it is more exquisitely portrayed than the former.

The two Arhats standing next to the main Bodhisattva represent the first practice ever displayed by ancient relics found on the Korean Peninsula. Thus, the piece is considered to be a unique and precious object.