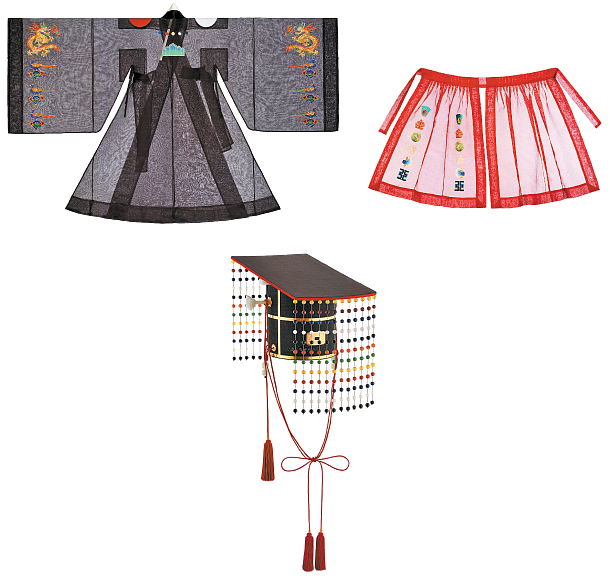 A reproduction of a 12-pattern robe worn by Emperor Gojong (1852-1919) at top left, the red skirt that was worn inside the robe, top right, and the 12-bead-laced string crown, above, are exhibited at the Kyungwoon Museum for the 120th anniversary of the establishment of the Korean Empire. [KYUNGWOON MUSEUM]

Attire is often regarded as a “mirror of the times.” Seeing how dress has changed with time allows people to witness what kind of political, social and cultural atmosphere existed in the past.

October marks the 120th anniversary of the establishment of the Korean Empire (1897-1910). To commemorate the event, Kyungwoon Museum, which is operated by the Kyunggi Girls’ High School’s Alumnae Association next to the school in southern Seoul, organized an exhibition that allows visitors to witness how the attire of the royal family changed before and after the establishment of the short-lived Korean Empire.

While other countries laughed at the fading dynasty for declaring itself an empire, Emperor Gojong (1852-1919) was determined to changed all of the royal customs as well as the style of the royal clothes.

So what did Gojong wear after declaring Korea an empire and himself the first emperor?

The major difference, according to Choi Yeon-woo, a professor of Korean Traditional Clothing at Dankook University, is that the dress and the crown of the Emperor Gojong became 12-patterned and 12-laced. Before the Korean Empire, Kings of the Joseon Dynasty wore clothes of a feudal lord characterized by nine-pattern dress and a nine-laced crown, following the dress code of China’s Ming Dynasty.

“The 12-pattern dress and 12-laced crown were a ceremonial dress that could only be worn by an emperor,” wrote Choi in his research paper on Emperor Gojong’s attires. “King Gongmin of Goryeo Dynasty (1351-1374) wore it a few times, but it was officially worn for the first time by the emperor from the Korean Empire.”

At the Kyungwoon Museum’s exhibition titled “The Korean Empire and its Dignity Found in Royal Clothing,” visitors can see the latest reproduced version of the 12-pattern dress and 12-laced crown worn by Emperor Gojong.

“When Korea became an empire, there were major changes in the royal clothing,” said Park Kyung-ja, vice director of the museum. “The royal families could finally wear clothing that fit their status.”

According to Park, the kings of the Joseon Dynasty were bestowed with clothes that were two levels below their status to show that Korea was China’s vassal state, but that Korea was able to recover after becoming an empire.

“There’s no real 12-pattern dress and 12-laced crown that managed to survive until today,” said Park. “Only one black-and-white photograph of Emperor Sunjong wearing the dress and the crown inside the ‘Records of Emperor Sunjong’ exists so we had to reproduce a full set of this dress, by carefully studying the picture and research papers and past records like Daehan-yejeon [the national ritual book of the Korean Empire] for the patterns.”

The basic outline of the dress, according to Park, referred to the original nine-pattern dress, which is on the state-designated Important Folklore Cultural Heritage List and in the possession of the National Museum of Korea.

“Kyungwoon Museum will probably be the very first museum to reproduce this dress by strictly following and studying all the relics, past records and research materials,” said Park, adding that there are reproductions that are used for the performances of the Royal Ancestral Rite and Ritual Music at the Jongmyo Shrine.

“But there had been criticism that the costumes used at the Jongmyo Shrine have some details that are incorrect,” Park added, insisting that Kyungwoon Museum’s reproduction work began in 2005.

The full set of Emperor Gojong’s ceremonial dress during the Korean Empire reproduced by the museum consists of 13 pieces including a ceremonial belt and back drapery; a jade ornament belt on each side; a round neck band with squared decoration; red socks; red shoes; the outer robe; the inner robe; a skirt; and an apron known as paeseul.

The exhibition also displays the reproduction of an empress’ ceremonial robe worn during the Korean Empire, which the museum reproduced in 2012.

“To commemorate the 120th anniversary of the establishment of the Korean Empire, we wanted to display the proper dresses of the emperor and the empress together,” said Park.

Several original garments worn during the Korean Empire are also on display, like a ceremonial robe, a jacket and a skirt for women as well as a coronet for a princess and hair ribbons, which were all donated to the museum by Lee Hae-kyung, the fifth daughter of King Uichin, the fifth son of Emperor Gojong. Lee is a graduate of Kyunggi Girls’ High School.

According to the museum, Queen Uichin did not have children of her own, but raised Lee as her own daughter at the palace. The ceremonial dresses were given to Lee by the Empress, who wanted Lee to wear them during her wedding.

The exhibition also displays the silverware, ceramic bowls and plates and silver bowls and plates that were used during the Korean Empire by the royal family, which were donated to the museum by another graduate of Kyunggi Girls’ High School Lee Nam-ju, the granddaughter of Heungwangun, who was the uncle of Emperor Gojong.

“Visitors will also be able to witness how the designs of the dresses changed over time, towards the end of the Korean Empire,” said Park. “The dressed were simplified, with narrower sleeves, removal of goreum, or the front ribbon, minimized sizes of paeseul and so on.”

The exhibition runs until Feb. 28.