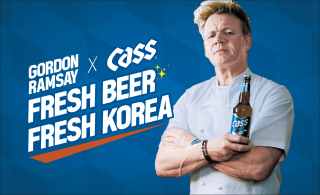 Gordon Ramsay is the new face of Cass in an advertisement that reveals the uniqueness and excellence of Korean beer. [ORIENTAL BREWERY]

Oriental Brewery (OB) has selected British celebrity chef Gordon Ramsay to be the new face of Cass and rolled out a series of advertisements that reveals the uniqueness and excellence of Korean beer.

Ramsay, who runs some 10 restaurants around the world, is best known for his biting remarks on television shows like “Hell’s Kitchen,” “Master Chef” and “Kitchen Nightmares.”

In the ads, Ramsay praises Cass as “bloody fresh” after having it with chicken and pork belly.

To ensure freshness, Cass is putting effort into improving the distribution process. The company has developed a “Fresh Cap” technology that’s applied to the bottle and helps double the beer’s fizziness. Fresh Cap is a patented OB technology with a special design that strengthens the seal and prevents air from getting in.

Cass has become the top beer in Korea with the highest market share and consumer preference, thanks to its fresh taste.

In a survey by market research firm Kantar Millward Brown, Cass was chosen by 43 percent of respondents as the most preferred beer. The survey polled 2,405 people between the ages of 19 and 55 from all parts of the country for three months, from April to June. The percentage is about 10 times higher than other competing products in the Korean market.

“We are planning to gradually expand our marketing to spread the unique taste of Cass,” a company spokesperson said, “and we take this as a pride in our company.”