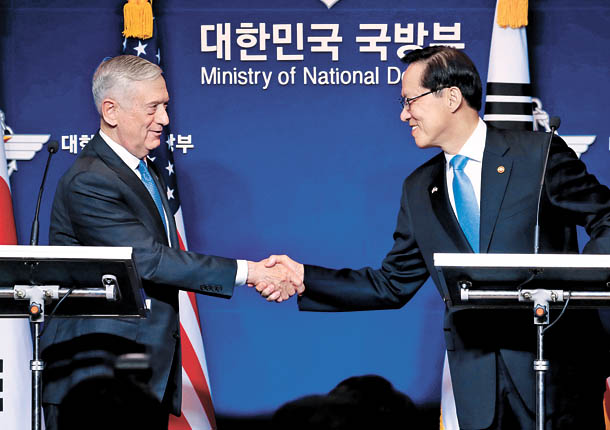 The Moon Jae-in administration’s ambition to regain wartime operational control from the United States has hit a snag, as the latest security consultation by U.S. and Korean defense chiefs failed to approve a restructuring plan for the combined forces.

Following the discussion, the 49th of its kind, a joint communique was issued. Song and Mattis also addressed reporters in a press conference.

According to the joint communique, Song and Mattis pledged to work together to implement an agreement made in June by Moon and U.S. President Donald Trump to “enable the expeditious conditions-based transfer of wartime operational control.”

But conspicuously missing from the communique was the much-anticipated approval of a plan for a new Combined Forces Command to oversee Korean and U.S. troops on the peninsula after the transfer. Song and Mattis were updated on the draft organization of the future Combined Forced Command and decided to continue to refine the draft through combined exercises and certifications, it said.

Earlier this month, the Ministry of National Defense told the National Assembly that the structure of a future combined forces would be discussed and approved at the Song-Mattis meeting. According to the draft, a Korean general would act as chief commander of the combined troops and an American general was to serve as deputy commander.

As of now, the United States has commanding authority of Korea-U.S. Combined Forces, while a Korean general serves as deputy commander. Wartime operational control of the combined troops belongs to the commander.

At the press conference, Song and Mattis each said the transfer will take place as agreed, but they made no mention of a plan to establish the future command.

“It was agreed that command will have a Korean commander and an American deputy commander, but other specifics need more discussion,” a Defense Ministry official told the JoongAng Ilbo. “We will report on it at the next security consultative meeting.”

Asked if Washington still agrees with the hierarchy, he said, “That’s been decided.”

The concept of the future command was agreed at the security consultative meeting in 2013. The structure is unprecedented for U.S. forces stationed in a foreign country. In the North Atlantic Treaty Organization (NATO), each member country has peacetime operational command, but a U.S. general, serving as supreme allied commander, has wartime operational control.

The United States now seems disinclined to accept the new arrangement, and The Wall Street Journal reported last week that Washington does not think Seoul is ready for the change, quoting U.S. officials.

“Despite Seoul’s strong expectation, the U.S. administration and Congress recently became reluctant,” a diplomatic source in Seoul told the JoongAng Ilbo. “The outcome of the latest security consultative meeting reflected this sentiment.”

The source added, “Congress is particularly unhappy with the structure of the future Combined Forces Command, in which the U.S. general will serve as deputy commander.”

As tensions escalated on the peninsula, conservatives in Korea have become skeptical about the Moon administration’s push for a speedy transfer, worrying that the move will weaken the Korea-U.S. alliance.

“The strategic deterrent power of the current Combined Forces Command comes from the symbolism that the U.S. military, the world’s most powerful armed forces, has control,” Kim Hee-sang, head of the Korea Institute for National Security Affairs, said in a recent interview. “The future command, therefore, will be fundamentally different from what we have today.”

At the press conference on Saturday, Mattis still said the latest security consultative meeting demonstrated a strong Korea-U.S. alliance. “We reviewed the alliance progress over the last year, and set the agenda for coming years on a number of important issues,” he said. “Further, we ensured our actions, whether the acquisition of inter-operational capabilities or the transfer of wartime operational control to ensure that this alliance grows stronger, not weaker, and our militaries are always ready to protect those threatened by the Kim [Jong-un] regime.”

Song also stressed that Seoul is not recklessly pushing the plan forward. “We are not looking to shorten the timeline that we have in mind, but rather we are looking to meet the conditions necessary for operational transition ahead of time,” Song said. “Even after the transfer, the Korea-U.S. alliance will become even stronger and we will have even better environment for combined operations.”

Other key issues that were discussed, however, were not made public, as the meeting was designed to prepare for the upcoming Korea-U.S. summit. Asked if there was a discussion on Korea’s initiative to build its own nuclear-powered submarines, Song refused to answer.

“This meeting was to check on the security issues to be discussed at the Moon-Trump summit on Nov. 7,” a government official said. “More specific agreements will be announced after the summit.”

At the meeting, Song and Mattis reaffirmed the U.S. commitment to offer extended deterrence to Korea and rotational deployment of U.S. strategic assets to the Korean Peninsula.

They also stressed the effectiveness of the recent U.S. deployment of the Terminal High Altitude Area Defense antimissile system in Korea and reassured that it will not target any other country but the North.

“The United States does not accept a nuclear North Korea,” Mattis said. “Diplomacy remains our preferred course of action. As I have repeatedly emphasized, our diplomats are most effective when backed by credible military force in this sort of situation.”

Warning the North that its military power is no match for the Korea-U.S. alliance, Mattis said, “Make no mistake, any attack on the United States or our allies will be defeated. Any use of nuclear weapons by the North will be met with a massive military response, effective and overwhelming.”