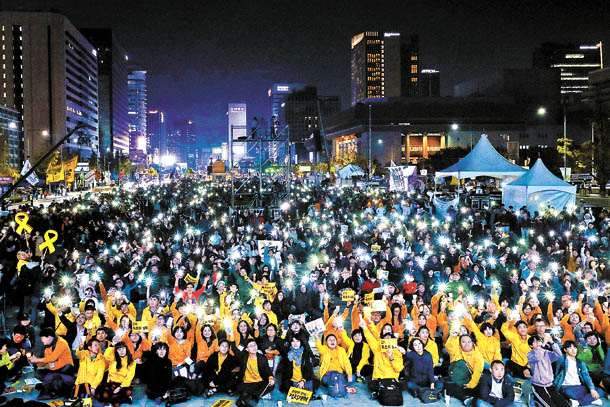 Tens of thousands of people gathered in Gwanghwamun Square, central Seoul, Saturday to mark the first anniversary of the candlelight vigils that led to former President Park Geun-hye’s removal from office, as her successor, President Moon Jae-in, highlighted the occasion by vowing to eradicate “deep-rooted social evils.”

The rally in Gwanghwamun saw nearly 60,000 people gather, according to the organizing group, which led the anti-Park demonstrations for 23 consecutive weeks at the same venue since Oct. 29, 2016.

A number of picket signs were visible in the crowd, including those urging the arrest of former conservative President Lee Myung-bak, Park’s predecessor, the reformation of the National Intelligence Service, granting voting rights to teenagers and the establishment of a second special committee to investigate the 2014 Sewol tragedy.

“Reformation of Korean society starts with rooting out social evils accumulated from the Park Geun-hye and Lee Myung-bak administrations,” said Park Seok-un, a senior official from the organizing group. “We need the power of the candles again in order to eradicate corruption and return democracy” to a time before those two presidents took office.

During a relay speech, Kim Ji-eun, an eighth-grader who volunteered in organizing the rallies last year, told the crowd through a microphone, “I decided to participate in the candlelight vigils after hearing from adults that the demonstrations wouldn’t change anything.”

Kim added, “I felt mixed emotions while working as a volunteer, and one of them was that I was standing at the center of a beautiful history.”

The organizers scrapped the original plan to march towards the Blue House after several critics opposed to the move, as they did not want to send the wrong message by marching on the Moon Blue House.

But some civil groups, including the Korean Confederation of Trade Unions, took the march on their own nonetheless, urging the Moon Blue House to end the deployment of the Terminal High Altitude Area Defense antimissile system in Seongju County, North Gyeongsang, as well as cancel the upcoming state visit of U.S. President Donald Trump. The march ended 200 meters (219 yards) away from the presidential office. A second rally was held in Yeouido, western Seoul, near the National Assembly, the same day, where individuals who opposed the Blue House march gathered for what was themed as a “candlelight party.” Some demonstrators showed up in Halloween costumes, while others held picket signs mocking the opposition Liberty Korea Party.

Park’s staunchest advocates showed up at the Seoul Station Plaza and the Daehan Gate of Deoksu Palace, both in central Seoul, to urge the release of the former president, who is currently standing trial for a web of corruption charges.

Moon lauded the candlelight vigils on his Facebook page on Saturday, writing that they “realized democracy and the constitutional value” of society, while “showing the way towards a new Korea.”

He added, “I won’t forget the passion and expectation of the candlelight vigils. I will place the public’s wishes at the front and walk to the very end with all of you.”

During an earlier meeting at the Blue House with business leaders participating in the 16th World Korean Business Convention, Moon vowed to create a “righteous Korea” by tackling “deep-rooted social evils.”