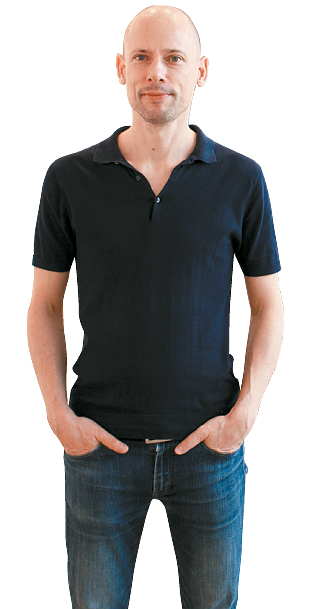 A viewer of German artist Tim Eitel’s paintings, now on view at the Hakgojae Gallery in central Seoul, might think they are lonely and mysterious. The paintings have a few human figures - often just one - whose faces are turned from the viewer or blurred, in wide, flat color fields with straight-line edges. They seem to inhabit voids.

Some might be reminded of the celebrated American painter Edward Hopper, although Eitel’s paintings have different color tones and more abstract qualities.

Eitel, 46, said in a press preview of his solo exhibition at the Hakgojae Gallery late last month that his works are open to viewers’ interpretations but added they are partly an experiment on how abstraction and figuration coexist in a single painting.

Referring to paintings on exhibit like “Architectural Studies” and “Railing,” Eitel said, “If you take out human figures [from the paintings], they become abstract paintings. If you put a figure in again, the color planes in the paintings become a space.”

Asked why most of the human figures’ faces in his paintings are hidden or blurred, the artist said it is to prevent a viewer from focusing on the human faces.

So, despite looking emotional or psychological, Eitel’s paintings are, at the same time, cool-headed questions on the theory of painting and twists on the works of masters of modern abstract art.

“Artists like Piet Mondrian tried to create paintings of flatness [avoiding the representation of the three-dimensional world as in classic Western paintings] but they didn’t succeed,” Eitel said. “That is because if you use more than one color in a painting, the color planes start to make a spatial relation.”

Among the works on view is a small painting “Tree and Stick,” which the artist said is “a sort of parody of Mondrian’s famous tree paintings,” which many textbooks use as an example of the evolution from figuration to abstraction.

Now in Hakgojae Gallery in central Seoul, German painter Tim Eitel’s small painting “Crown (King)”(2017), above right, hangs beside his bigger painting “Interior with ‘Crown (King),’” above left, which depicts a room with the painting. “So, you [the viewer in Hakgojae] look at a person in the same situation as you were or will be, in a different space,” said the 46-year-old artist. [Jean-Louis Losi and courtesy of Tim Eitel Galerie EIGEN + ART Leipzig/Berlin, HAKGOJAE]

The artist’s questions about abstraction and figuration are related to his background. Eitel is a prominent member of the so-called “New Leipzig School,” a post-reunification German art movement that combines the figurative tradition of East Germany with abstract elements from the West. Now he teaches at the prestigious Ecole des Beaux-Arts in France.

Eitel’s unique qualities of being serious and playful at the same time are also shown in two paintings in the same room at the Hakgojae. One is a small painting “Crown (King)” that depicts a medieval sculpted bust. Beside it is a bigger painting “Interior with ‘Crown (King)’,” which depicts a woman looking at the small “Crown” painting.

“So, you [the viewer in Hakgojae] look at a person in the same situation as you were a moment ago or will be in a moment, in a different space,” Eitel said.

In this way, the artist explores not only spatial relations of planes within paintings but also relations of spaces inside and outside the paintings.

This is also shown in a large painting “Architectural Study (Barragan),” which is based on the artist’s impression of Barragan House in Mexico City, which was architect Luis Barragan’s studio and is a famous piece of modern architecture.

Even paintings that are based on existing spaces like this can’t help being different from the spaces, as paintings are about “what we see” and “the way we perceive is changed by what we know,” Eitel said.

When we enter a space, we look around and focus on what we think is interesting or important, while neglecting other things, he said. So, recreating a new fictional reality with omitted details is “much closer to what we actually see,” he added.

“To me, painting is recreating the moment of encounter with a space ... recreating the atmosphere and somebody’s attitude,” the artist said. “Paintings are dialogues between image and memory.”

All 11 paintings on view in the solo show were created this year and represent a “synthesis of everything I did before ... including landscapes, interiors, figures disappearing in the dark,” he said.

The exhibition has the title “Apparition of a Distance, However Near,” from the sentence the German philosopher Walter Benjamin wrote to define the characteristics of ‘aura’ in his book “Work of Art in the Age of Mechanical Reproduction.”