Under siege by Xi and Abe

Under siege by Xi and Abe 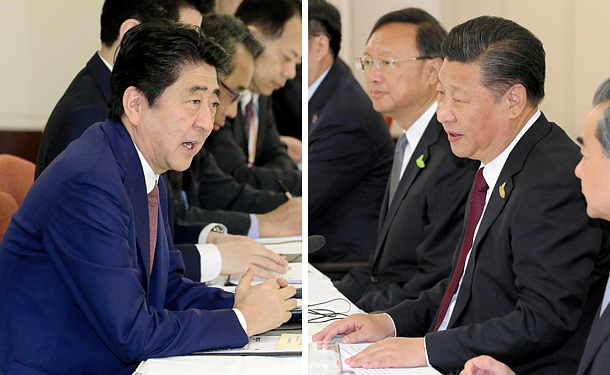 Chinese President Xi Jinping and Japanese Prime Minister Shinzo Abe meet in July on the sidelines of the Group of 20 Summit in Hamburg, Germany. [YONHAP]

Expectations grew in Korea that criticism from the IMF would soon put a break on the Bank of Japan’s expansionary measures. But nothing happened, and the IMF did not attack Abenomics any further.

About a month later, a key member of the IMF resolved my lingering questions. It turned out that a few days after Lagarde’s criticism of Japan, Abenomics was on the agenda of the IMF’s board of directors meeting. The United States strongly defended the policy for being helpful to global economic recovery, and critics quietly gave up their views. As the United States was the main hub of quantitative easing, it was in no position to criticize Japan.

Since then, Abenomics has gained international approval. It has shown that the United States is the absolute stakeholder of the IMF and Japan is an unchallenged partner of the United States. It also demonstrated the strength of the U.S.-Japan alliance.

Korea often faces unfairness in its relations with China. Economic retaliation over Seoul’s decision to allow the U.S. military to deploy a missile defense system is one example. China’s ban on Korean cultural imports and tourism, limits to Lotte Mart’s business and troubles for Hyundai Motor have all damaged our economy.

Although the measures are clearly against the global trade order, we are unable to lodge proper complaints. It is widely believed that Chinese President Xi Jinping has the final word on imposing and lifting retaliatory trade actions.

Abe and Xi have become incredibly powerful. Abe is an absolute leader in Japan. No politician can match him after he secured an overwhelming victory in the Japanese legislature. Abe is aiming to become the country’s longest-serving prime minister.

In China, Xi has begun his second term as president. Xi is considered to have the greatest amount of power since Mao Zedong. His photo took up half the front page in one issue of the People’s Daily, the mouthpiece of the Communist Party of China. That was not possible during the presidencies of Jiang Zemin and Hu Jintao. It shows that Xi is the sole leader in China.

Both Abe and Xi have managed to build strong relations with U.S. President Donald Trump, who promotes “America First” policies. The first-name basis between Abe and Trump is unprecedentedly strong. Xi, too, has won praise from Trump, who says they have a special relationship. South Korea’s insecurity that it will be neglected in the process of nuclear negotiations dominated by Abe, Xi and Trump is not entirely groundless.

The North Korean nuclear crisis is not the only concern. Abe is about to give another push for Abenomics, and the market has already detected the signs. On Oct. 20, on the eve of Japan’s legislative election, the yen dipped to the lowest in five months, below 1,000 won per 100 yen.

Xi’s second term will also be dramatically different. He did not present a quantitative goal at the Communist Party Congress. Instead, the Chinese leadership called for structural reform to remove bubbles and prevent insolvency.

China’s radical changes may bring about another storm for South Korea. During the 2000s, when China was recording 10 percent growth, prices for raw materials skyrocketed. But once China’s growth slowed, prices plummeted. Whenever China fluctuates, the Korean economy is dealt serious blows.

Abe and Xi are tough partners for South Korea. But the Moon Jae-in administration and opposition parties are engaging in a deadly political battle. It harkens back to Joseon times 400 years ago, when politicians were embroiled in deadly factional fights while hundreds of thousands of Japanese soldiers were on their way to invading.