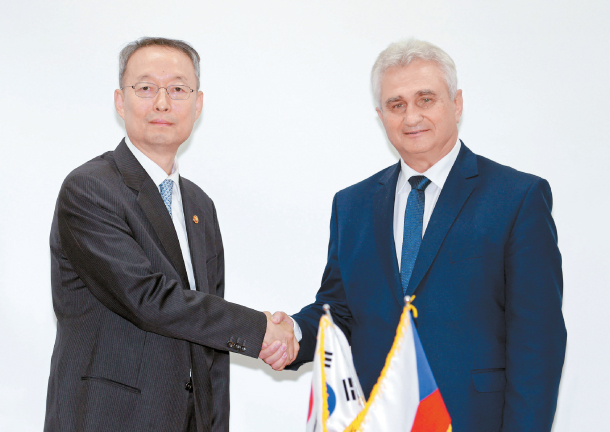 Paik Un-gyu, Korea’s minister of trade, industry and energy, left, shakes hands with Milan ?tech, president of the Czech Senate, after a meeting in Seoul on Monday. [YONHAP]

The Korean government expressed its intent on Monday to join a bid for a nuclear project in the Czech Republic, stressing the country’s advanced reactor designs and knowledge in development and operation accumulated from decades of work.

Paik Un-gyu, the minister of trade, industry and energy, met with Milan ?tech, president of the Czech Senate, to discuss ways to expand cooperation in nuclear energy and other industrial sectors.

Their meeting came as the state-owned utility Korea Hydro and Nuclear Power has been actively marketing its nuclear reactors in the Czech Republic, which is expected to open a bid in late 2018. The scope and schedule of the project is not yet confirmed.

“Korea is keen on joining the Czechs in their nuclear plant construction project and hopes to contribute to the development of its nuclear industry,” Paik was quoted as saying during the meeting.

Paik stressed that Korea has 40 years of nuclear reactor development and operation expertise and shared the government’s plan to support overseas projects, the ministry said. The government has vowed to support local companies’ bids to export nuclear reactors in a move to ease concerns that a domestic nuclear phase-out plan could adversely affect efforts to secure new contracts.

After the meeting, ?tech will visit the facilities of Doosan Heavy Industries and a nuclear plant complex in Ulsan, the ministry said.

Earlier this month, Jan Stuller, the Czech special envoy for nuclear energy and other nuclear regulators visited nuclear facilities in Korea to inspect their safety. The Czech media has reported that Korea, China, Russia, France and Japan have shown interest in the nuclear project.

The Czech Republic has six nuclear reactors generating about a third of the country’s electricity and plans to expand the proportion of nuclear energy to over 50 percent in 2030, according to the World Nuclear Association.