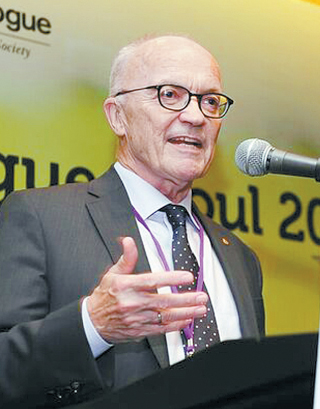 Finn Kydland, co-winner of the 2004 Nobel Prize for Economics, speaks during the Nobel Prize Dialogue Seoul 2017 held Monday at the InterContinental Seoul COEX under the theme “The Age to Come.” [KOREAN ACADEMY OF SCIENCE AND TECHNOLOGY]

Finn Kydland, a Norwegian economist and co-winner of the 2004 Nobel Prize for economics with Professor Edward Prescott of Arizona State University, suggested extending Korea’s retirement age to deal with a rapidly aging society during an interview with a group of reporters on Monday in Seoul.

Kydland, who was awarded the Nobel Prize for research on driving forces behind business cycles and the time inconsistency of economic policy, visited Korea along with four other Nobel laureates to participate in the Nobel Prize Dialogue Seoul 2017 produced by the Nobel Media in partnership with Korean Academy of Science and Technology under the theme “The Age to Come.” It is the first time the cross-disciplinary meeting with Nobel laureates was held in Korea.

“One could raise the retirement age,” Kydland said when questioned how Korea can respond to the aging of its workforce in the long run. “I’m obviously in favor of that because I want to work until I’m 90 or more.”

Approaching the aging problem from the economic perspective, Kydland said a major problem is linked to constraints in the government budget. Aging, in that context, means there will be fewer people paying taxes while there are more receiving government money in benefits or entitlements like pensions.

Increasing the working population, which can both earn money and spend, could be a solution other than the government raising corporate taxes or income taxes or a combination of the two, according to Kydland.

Another potential solution could be taking in “immigrants in their 20s or 30s,” he added.

While Korea isn’t a place with a large immigrant population, Kydland introduced a study from a former student who calculated the contribution of immigrants to the government budget both in terms of government earnings and tax expenditure.

According to the study, immigrants in their late 20s and early 30s could have a positive contribution to a government budget since they are working, while immigrants who are either very young or very old could have a negative impact: they don’t pay income tax but do get costly benefits like health services.

A country doing very well preparing for the aging of its society is Norway, Kydland said. It has introduced what’s called an Oil Fund, also known as the Government Pension Fund Global. The country invests surplus revenues from the Norwegian petroleum sector for the future generation.

“I regard [the fund] as one of the prime examples of a nation having been able to tie its hands [restrain itself] for the future,” Kydland said. “There’s always tremendous political pressure to spend more [for state budget] but they stick to that long run view.”

Asked why Korea hasn’t produced Nobel Prize winners, Roberts said the Korean government should fund scientists and allow them to freely work on whatever they are interested in without pressuring them to make commercial use out of the research.