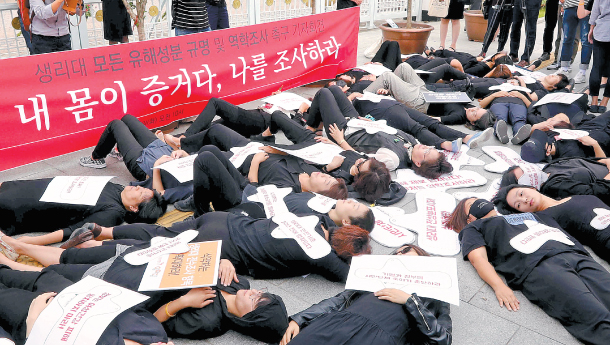 In the wake of the controversy over the safety of sanitary pads in August, protesters from the civic group Korea Women’s Environmental Network took to the streets last month, demanding an epidemiologic investigation. [JOONGANG ILBO]

Ever since the controversy over the safety of sanitary pads broke out in Korea this August, 25-year-old university student surnamed Park has been afraid to have her period. A cost-conscious consumer who used sanitary pads made by the brand Lilian, Park experienced severe cramps and saw a drastically decreased flow after she started using the brand’s pads six months ago. But she thought it was just temporary, derived from stress.

It wasn’t until August, when Lilian was found to contain the largest quantity of volatile organic compounds, or VOCs, among the products tested by the civic group Korean Women’s Environmental Network, that Park began to seriously consider her choice of sanitary pads. 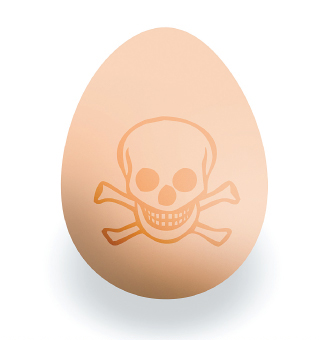 After weeks of debate, the government declared late last month that all sanitary pads and panty liners on the market posed no health risks to the public. Some experts, like chemistry Professor Lee Duck-hwan from Sogang University, backed the government’s claim, arguing that the VOCs discovered were from the pads’ underlying adhesive layer, therefore, had almost no chance of infiltrating the body.

Despite the assurances, Park still feels wary of the potential health risks, especially amid recent crises over daily necessities, such as Oxy Reckitt Benckiser’s toxic humidifier sterilizer and eggs which were contaminated with pesticides. She purchased cotton pads as a substitute, and waited three weeks for them to be delivered due to a surge in orders. 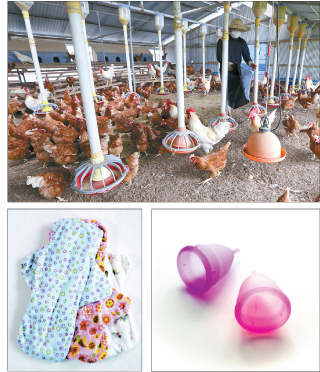 “I’m not sure what products I can trust. These necessities that people purchase to pursue cleaner and healthier lifestyles seem to have, in fact, damaged our health,” Park said.

Local fears over chemical substances date back to 2011, when an investigation discovered that Oxy Reckitt Benckiser’s humidifier sterilizer - which received a safety certification sticker called a KC Mark - contained harmful chemical materials. The sterilizer was found to have sickened and killed hundreds. After that tragedy, even more daily necessities have been found to contain harmful chemicals.

In March, the Korean Women’s Environmental Network announced that five sanitary pads and five panty liners contained VOCs after conducting a toxicity test. In August, an egg pesticide crisis broke out, and almost 50 poultry farms in Korea - more than half of which the government had previously labeled as “eco-friendly” farms - were found to have used illegal insecticides or chemicals in excess. Other products such as toothpaste made by AmorePacific and wet tissues from Taekwang also had to be recalled after they were found to have the same toxic chemicals used in Oxy’s humidifier sterilizers.

Following these crises, there has been a rise in what many are calling chemophobia. Generally defined as an irrational fear of chemicals, chemophobic people try to rule out the use of chemicals in their daily routines, although to what extent differs by person.

Fifty-four-year-old Kim Kyung-ae, a mother of two, has made major adjustments to her life due to her fear of chemicals.

After working for eco-friendly organization iCOOP for seven years, Kim realized the serious health risks chemicals can pose to one’s health. Ever since, she has minimized her use of chemical products by either personally making or purchasing eco-friendly goods like skin lotion, shampoo and detergent from small business owners. The recent crises have reminded her of the danger of chemicals, forcing her to look back on what she and her family consume.

Regarding the sanitary pad crisis, she said, “Women of my generation used cotton pads, and there was hardly an issue involving carcinogenic chemicals. Though cotton pads may be a little inconvenient, they at least don’t damage women’s health.”

Some women have turned to replacements for sanitary pads such as menstrual cups (a flexible bell-shaped feminine product made of medical grade silicone), sea sponge tampons (which are made of plant-like organisms that grow in colonies in the ocean) and cotton sanitary pads.

Demand for these substitutes skyrocketed with cotton pads and menstrual cups seeing a 1,807 and 422 percent surge in demand between Aug. 13 and 26, respectively, highlighting the collective fear felt by consumers. The data was provided by Enuri, a website for comparing the prices of all kinds of products.

“I use cotton pads for the sake of protecting my health and the environment,” said a 25-year-old university student who has been using cotton pads over the past five years. “I can’t disagree they are inconvenient because I need to bring the used ones back home, and wash and dry the blood-soaked pads. When going on a trip, I use disposable sanitary pads. But in the wake of the recent sanitary pad crisis, I think it was a wise choice for me to have started using cotton pads from early on.”

Unlike cotton pads, menstrual cups and sponge tampons have not yet been certified for sale in Korea, so consumers are purchasing them from abroad. But backed by the sudden jump in demand, the Ministry of Food and Drug Safety is currently inspecting the safety of menstrual cups for distribution in the local market.

But these eco-friendly products that don’t contain chemicals can cause more troubles, according to Professor Lee from Sogang University.

“Would you use moldy wet tissues or wet tissues that contain some preservatives?” Lee asked, referring to a number of wet tissues over the past years that quickly went bad for not having contained enough preservatives. Lee further explained that the same rule applies to other “eco-friendly” products.

“Using chemicals has two sides. It could be toxic when used incorrectly, but it could function as medicine when used correctly,” said Lee.

The chemical crises have also prompted consumers to search for authentic eco-friendly eggs produced through what is known as “animal welfare farming,” which is a way of raising animals in a wider space instead of tightly packed spaces where chickens can barely move. The logic of this way of raising animals is that free-range birds have less of a chance to be infected with infectious disease, and therefore, are less likely to need exposure to pesticides.

After the outbreak of contaminated eggs in August, the Ministry of Agriculture, Food and Rural Affairs dedicated 9 billion won ($8 million) of next year’s budget to foster animal welfare farming instead of the prevailing mass-breeding conditions. The ministry set a goal to increase the number of animal-friendly poultry farms from the current 8 percent (104 farms) to 30 percent by 2025.

But some experts claim that animal welfare farming isn’t the answer.

“I don’t believe animal welfare farming is an alternative to prevent another contaminated egg crisis,” said Professor Ha Sang-do from the Food Science and Technology Department at Chung-Ang University.

“Safety and welfare are two different things. Animal welfare farming is about managing the quality of life of the birds, so it does not necessarily guarantee safety [of poultry and their eggs]. Safety can be guaranteed in even densely-packed farms.”

Ha explained that ticks often reside in henhouses. They don’t always live on poultry, but rather suck their blood at night and return to hiding in the day. So keeping henhouses hygienic and having them regularly exposed to the sun are ways to avoid poultry from getting infected. Without these regulations, even animals raised on welfare farms will be exposed to ticks, requiring pesticides.

The government should set up hygiene standards for henhouses and ban the use of pesticide to manage the quality of poultry and eggs, according to Ha.

Widespread fears like chemophobia are likely to occur when people have low trust in institutions and when consumers don’t take responsibility for their purchasing decisions, according to Professor Lee from Sogang University.

“The separation of production and consumption has played a key role in spreading chemophobia,” said Lee. “In the past, people personally cultivated and made what they ate and used. With the commercialization of processed food and products, people don’t know what ingredients had been used and who processed what they consume.”

Also, the final choice to decide whether something is safe to use or eat is up to consumers, according to Lee. “Products available on the market do not guarantee safety, but instead are the products that passed the legal standard in the amount of chemical content,” Lee said while acknowledging the government’s lack of quality control in igniting the contaminated egg crisis and blaming Oxy’s irresponsibility for its snake-oil humidifier sterilizers.

To combat chemophobia, people should push the government and corporations to come up with safer products that actually meet safety standards, according to Lee.

“The government needs to expand the number of mandated products subject to go through risk assessment. Also, corporations should run businesses with a sense of responsibility and should be required to disclose the ingredients that make up their products instead of continuing with the current voluntary system.”

“Consumers need information about what products are allowed to be used to which extent per day. Since information about chemicals requires professional knowledge, civic groups or non-government organizations should be formed to deliver consumers with necessary information,” Shin said.