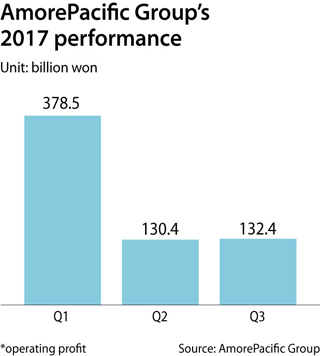 Korea’s No. 1 cosmetics producer AmorePacific Group posted yet another dismal earnings report Monday in the third quarter this year, due to a sales slump in the domestic market because of declining tourists and a slow recovery in its overseas market.

The report said that its third-quarter operating profit recorded 132.4 billion won ($117.7 million), which is 39.7 percent lower than last year’s third quarter. Its revenue was 1.4 trillion won, a 14.2 percent year-on-year drop.

“Due to decline in tourists to Korea,” the company said in a release, “revenue and operating profit recorded reverse growth.”

It added, “To enhance our competitive edge in the domestic market, AmorePacific Group will strengthen its product and business portfolio, and for the global market, we will pursue business diversification for sustainable growth.”

The cosmetics producer’s net profit from July to September recorded 79.8 billion won, which is 31.9 percent less than the same period last year.

The accumulated net profit as of September was 380.7 billion won, a 33.5 percent year-on-year drop.

The group’s major affiliate, AmorePacific, which represents brands like Sulwhasoo, Laneige and Hera, made 519.5 billion won in operating profit, recording a 30.4 percent year-on-year drop in the third quarter.

Innisfree, well known for its nature-friendly theme, recorded one of the worst performances in the third quarter, making 20.5 billion won in operating profit, a 45 percent year-on-year drop.

Etude House recorded 700 million won in operating losses and posted 61.4 billion won worth of revenue, a 19 percent year-on-year drop. Etude House’s sales, which largely depend on duty-free goods, were hit hard by the decline of tourists.