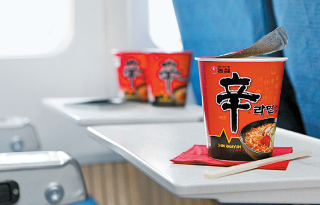 Nongshim’s best-selling Shin Ramyun is now available aboard flights on all seven of Korea’s airlines that offer in-flight food service, the company said Monday. It is the first food maker to achieve the feat.

Since it first began serving Shin Ramyun on select classes of Korean Air flights in 1997, Nongshim has continued to expand its airline partnerships. In May, the company signed a direct sourcing contract with Air Seoul, Asiana Airlines’ low-cost carrier, to complete its partnership with all of Korea’s airlines.

Air Busan is the only one excluded from the list because it does not have in-flight food service.

“In the 1990s, overseas trips weren’t common,” a Nongshim spokesperson said. “Shin Ramyun at the time was a privileged food that was only provided to first-class and business-class customers as part of a premium service, but its demand rose sharply with emergence of LCCs.”

On top of Shin Ramyun, Nongshim is diversifying its products for airline customers to seafood-flavored Ojingeo Jjambbong and the black-bean noodle Jjapaghetti.

Nongshim plans to continue signing partnerships with overseas airlines. It currently sources its product to 20 foreign airlines including American Airlines and United Airlines. The food maker said it plans to double the number of foreign airline partners by 2020. It most recently signed a partnership with Aeromexico, the company’s first Latin American partner.

“Nongshim will continue to target global customers by sourcing customized products depending on the country and its culture,” the company said in a statement. “For example, we provide cup noodles that don’t include meat on Emirates’ Dubai-Incheon route.” Air Arabia, a low-cost carrier under Emirates, currently offers Shin Ramyun on all its routes, according to the company.