Taking new Camry on the road

Taking new Camry on the road 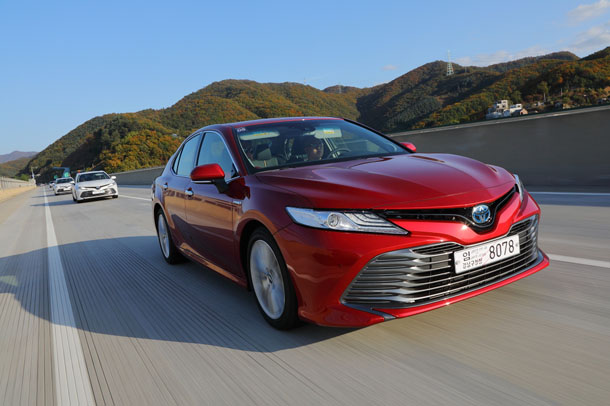 The completely overhauled sedan - the eighth iteration of the model - comes in two different models, hybrid and gasoline.

“The difference between the new Camry and the previous version is the design as well as the improved drivability,” said Toru Fukushima, a project manager from Toyota’s headquarters in Japan in charge of development of the Camry. “Drivers can better control the vehicle with more flexibility. We had competing vehicles such as the Hyundai Grandeur in mind when developing this Camry.”

Compared to the seventh-generation Camry, the height of the driver’s seat in the new version was lowered 20 millimeters (0.78 inches), ensuring better stability. At the same time, the wheel base was extended by 30 millimeters and the length of the car by 50 millimeters, also contribution to more stability.

According to the Japanese project manager, the new Camry adopted rear wishbone suspension as used in the Prius model, which also ensures more stable riding.

To see how the vehicle came out, the Korea JoongAng Daily got behind the wheel of a new Camry on a 100-kilometer (62-mile) course from Jamsil in southern Seoul to Yangpyeong in Gyeonggi on Oct. 24. We drove a gasoline model to Yangpyeong and a hybrid model back to Seoul.

Our first conclusion: anyone interested in the new Camry in Korea may want to consider the hybrid over the gasoline version despite the steeper price tag.

Departing from Lotte World Mall in Jamsil, the gasoline model did fine in the city.

After hitting the highway, however, it became clear that the vehicle is not made for speed freaks. The engine made a rumbling noise every time the driver pushed hard on the gas pedal. The vehicle stayed in “eco mode” throughout the drive with no option for another mode that would make it easier to increase the speed.

The gasoline model did fairly well on a winding course off the highway, offering smooth and stable cornering even at nearly 90 degrees. It was apparent that the gasoline Camry is meant to be a family-friendly car. A Toyota spokesperson said the company is not selling the sports version of the gasoline model in Korea, although it is on sale globally.

On the winding course, it was sufficient to run the vehicle on its electric motor.

But on the highway, the gasoline engine kicked in. The hybrid model made a similar straining noise as its gasoline cousin when the driver tried to get up to speed in eco mode.

Sports mode, however, was a whole new game. The vehicle responded quickly to the pressure on the accelerator.

Although there wasn’t much difference between normal mode and sports mode, it was handy to have options other than eco mode, unlike in the gasoline model.

The sticker price of the gasoline model starts at 35.9 million won ($31,915). The hybrid model’s retail price starts at 42.5 million won. The hybrid model not only qualifies for tax breaks, but also discounts by the government including a 50 percent discount on government-run parking spaces, according to Toyota, although it cannot receive a government subsidy given to eco-friendly vehicles as its displacement exceeds 2.0 liters, or 2,000 cc.