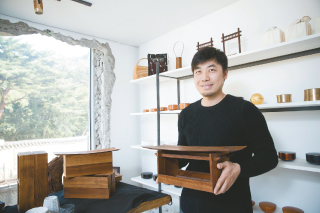 Jo Gi-sang, head of Fenomeno, holds a wooden armrest he made in collaboration with a traditional Korean craftsman at his office in Wonseo-dong, central Seoul, on Tuesday. [WOO SANG-JO]

Korean heritage is alive and well in the office of Fenomeno in Wonseo-dong, central Seoul, near the historic Changdeokgung Palace.

Fenomeno is a branding and design agency founded by seven designers specializing in different areas of art such as architecture, visual design and video arts. Their tableware, branded as “Auroi,” is designed to honor the heritage of Korean culture while reflecting modern taste.

To develop the consumer goods brand, the team has been collaborating with a master craftsman of traditional arts for four years. Jo Gi-sang, 38, is the chief of Fenomeno as well as the creative director of Auroi.

Jo, who majored in transportation design at Kookmin University in Korea, went on to study yacht design at the Italian design school Instituto Europeo di Design in 2007. After earning his master’s degree, he joined a custom-made yacht designing company in Italy.

He won the Millennium Yacht Design Award in 2008, 2009 and 2010. At the award ceremony in 2010, he had a chance to meet with Chris Bangle, who was the former chief designer for the German carmaker BMW and Jo’s role model.

At the time, Bangle asked Jo, “What is the specialty of Korean design?” According to Jo, he couldn’t give an answer right away.

In following years, the yacht industry was hit hard due to the global financial crisis, and Jo ended up going back to Korea with Bangle’s question still lingering in his mind. The first job he took after opening up a small design office with his friend was rebranding apples produced by a country farmer.

“I was happy to find there were so many heritage designs that were outstanding both aesthetically and scientifically,” Jo said. “But [finding them] was also a lot of homework for me. I wondered why people nowadays don’t use designs anymore, because you can find the answer only when you know the real problem.”

Major drawbacks to Korean traditional brass tableware, according to Jo, are that they are heavy, hard to clean and often too big.

Jo made his own set by fixing these problems. He even tried varnishing the dishes with lacquer to give them a new look. Jo’s dishes ended up receiving favorable reviews at world design exhibitions, and now the Blue House, the Ministry of Culture, Sports and Tourism and various private companies have become his customers.

“These days,” Jo said, “I’m looking for ways to lower costs by persuading craftsmen with no interest in developing new technologies, since consumers are familiar with cheap industrial products.”

According to Jo, he earns money by his branding and consulting service through Fenomeno and produces Auroi dishes out of a sense of duty.

“Once you step into the world of handicraft,” he said, “you can never escape.”