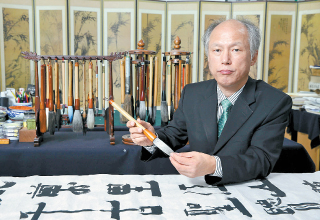 Professor of Chinese language and literature Kim Byeong-ki, at the calligraphy laboratory in Chonbuk National University in North Jeolla on Oct. 16. [CHANG JEONG-PIL]

In what is claimed to be the age of the Fourth Industrial Revolution, Kim Byeong-ki, professor of Chinese language and literature at Chonbuk National University, is busy trying to balance traditional calligraphy and its application in the modern era.

Kim is not only a university professor, but also a calligrapher and the general manager of the 2017 World Calligraphy Biennale of Jeollabuk-do. This year, the theme of the festival is “Purity and Application,” and will focus on “dividing pure calligraphy, which is faithful to the fundamental concept of calligraphy, and the application of calligraphy in this age.”

Kim hopes that the biennale will serve as a platform to expand the use of calligraphy. Notable participants include Chairman of JoongAng Media Network Hong Seok-hyun, Assemblywoman Nak Kyung-won from the Liberty Korea Party, former head of the Ministry of Interior and Safety Chong Jung-sub and special prosecutor Park Yung-soo, who will be presenting their works.

Park, who led the investigation against former President Park Geun-hye last May, will exhibit his calligraphy work, titled “Si Woo,” which means seasonal rain. “Even though I only wrote two characters,” Park said, “the work is still classy.”

The biennale started out as a cultural event commemorating the 1997 Winter Universiade, a multi-sports competition which took place in Muju, North Jeolla, and became the first international calligraphy biennale.

“It’s unbelievable that Korean citizens hold Admiral Yi Sun-shin in such high regard and yet don’t know one line from Yi’s War Diary, which is written in Chinese,” Kim said. He said the government needs to revive Chinese and calligraphy education and include it in the standard curriculum.

This year the biennale will hold 25 events divided into five sections, including opening ceremonies, exhibitions and an academic conference, with 1,000 participants from 21 different nations.

Kim says some events will combine calligraphy with dance, music, videos, fashion and other traditional games and activities.

The exhibit will consist of 1,300 works of art influenced by Chinese calligraphy master Wang Xizhi, along with other Chinese masters, calligraphy theories held by the participating artists and other passages that have emotionally driven them.