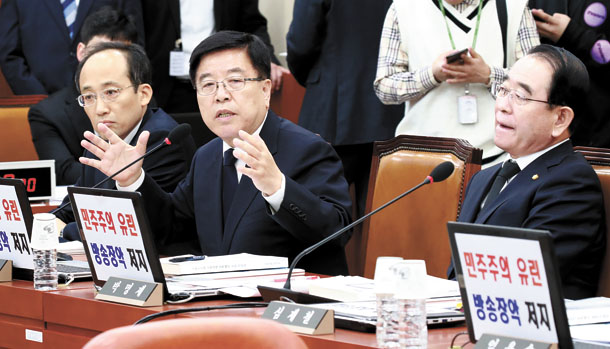 The main opposition Liberty Korea Party decided Monday to end its boycott of the National Assembly interpellation after four days, as its lawmakers agreed that the walkout was ineffective.

Since Thursday, the conservative opposition party has been boycotting the legislature’s inspection of the government in protest of the Korea Communications Commission’s decision to add liberal members to the board of directors of a public broadcaster.

The state broadcasting watchdog allowed the ruling Democratic Party to name two members on the board of MBC. The board has the power to name MBC’s new president.

The LKP held a general assembly of its lawmakers on Monday and decided to end the boycott. Rep. Chung Woo-taik, LKP floor leader, told reporters that the boycott is over, but it will continue to challenge the Moon Jae-in administration’s attempt to control public broadcasters.

“We decided to return to the interpellation while fighting against the ruling party and the administration inside the legislature,” he said.

The LKP decided to wear black suits for legislative sessions to “mourn the death of public broadcasters.”

The 20-day interpellation was scheduled to end today. If the LKP continues the boycott, it will have to skip key events scheduled for next month.

The LKP has been promoting a strong Korea-U.S. alliance and its lawmakers do not want to skip Trump’s speech. This makes it difficult to skip Moon’s speech, as the contrast may invite criticism.

A review of the next year’s budget bill also starts in November. Even if the LKP does not attend, the budget review will move ahead as planned because of the deadline.

In that case, the infrastructure investment budgets for the districts of LKP lawmakers could be neglected.

The LKP’s boycott also failed to win other opposition parties’ support. The People’s Party, Bareun Party and Justice Party all attended the interpellation along with the ruling Democratic Party.

While the LKP lawmakers did not show up, no interruption took place in the interpellation schedules.

The public was also critical of the boycott. The NGO Monitoring Team on the National Assembly Interpellation, comprising 270 nongovernmental groups, said it is undesirable for a political party to boycott the inspections on the government.

“Unless there is no channel to convey its message, the boycott is unnecessary. The LKP is one of the largest parties, and we wonder they really have to boycott all interpellation sessions,” said Hong Geum-ae of the monitoring team. “The habitual boycott of the interpellation for political reasons must be changed.”

It was not the first time for the LKP to hold a legislative boycott. When a local court issued an arrest warrant against MBC President Kim Jang-kyom in September, the LKP walked out. It ended the boycott after one week. At the time, the move was criticized for taking place amid the security crisis in the aftermath of the North’s sixth nuclear test.