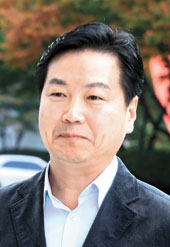 Questions are growing over the competence of the Blue House’s vetting of candidates for top jobs after it missed problems on the resume of a nominee to head a new start-up ministry.

Last week, President Moon Jae-in named Hong Jong-haak, former lawmaker of the Democratic Party and a liberal economist, as minister of SMEs (small- and medium-sized businesses) and Startups. The economist-turned-politician is now facing a barrage of criticism from opposition parties over controversial transfer of assets among his family members.

While working as a proportional representative of the Democratic Party from 2012 till 2016, Hong was an outspoken critic of family-run conglomerates and their habits of transferring expensive assets among family members.

He was one of 10 lawmakers who sponsored a bill to revise the law governing inheritance and gift taxes in 2014 to levy higher taxes on such transfers. In 2013, he argued at the National Assembly that higher taxes should be levied on inheritance of over 3 billion won ($2.67 million). Hong, however, increased his own family’s wealth thanks to generational wealth transfer. When he became a lawmaker in 2012, he reported 2.17 billion won in family assets. But when he accepted Moon’s nomination this month, he reported nearly 5.58 billion won.

The opposition parties are particularly critical of the way Hong and his family inherited their assets. When Hong received an apartment in Apgujeong-dong, Gangnam District, in 2014 from his mother-in-law, he and his wife split the ownership, each owning 420 million won worth.

Opposition parties said ownerships of the properties were split and transferred to the Hong family to evade gift taxes. Hong, his wife and his daughter paid a total of 990 million in gift tax. By splitting the ownerships in the wealth transfer, the family saved about 300 million won in gift taxes, tax accountants said.

During the transfer from Hong’s mother-in-law to his teenage daughter, the daughter borrowed 220 million won from her mother. Hong said it was a legitimate deal and said they signed a contract. Rep. Choi Yeon-hye of the Liberty Korea Party said the family had to pay 30 million won in gift tax if the mother gave 220 million won to the daughter. “They appeared to have created the loan contract to dodge the tax,” Choi said.

Hong claimed that his daughter paid interest on the loan using the money she earns from the building she received from her grandmother. The daughter is reportedly earning about 5 million won a month.

While the methods used in Hong’s family wealth transfers are not illegal, opposition lawmakers said they contradict what Hong has promoted as an economist and politician. “How come other people’s wealth transfers are evil, while your family’s wealth transfer is just?” Rep. Jun Hee-kyung, spokeswoman of the Liberty Korea Party, said Friday, demanding Hong give up the nomination.

The Bareun Party and the People’s Party also said Hong must resign or the Blue House must withdraw the nomination.

The Blue House said Monday that the family wealth transfers were all scrutinized during its vetting process. “Hong himself must make clear that he didn’t evade tax but used techniques to save tax liability,” a presidential official said. Doubts have been raised over whether the Blue House really was aware of the family wealth transfer issue when it was vetting Hong. A nominee is supposed to be scrutinized by the Blue House’s senior secretary for civil affairs.

A 16-page preliminary questionnaire for a senior public servant candidate used in the Park Geun-hye Blue House included about 200 questions. Liberty Korea Party Rep. Kwak Sang-do, who served as the civil affairs senior secretary for Park, made it public in June.

Among the 200 questions, 66 are about wealth creation and tax payments. Among them, 12 are directly related to the techniques used by Hong and his family, including the controversial loan between Hong’s wife and daughter and the teenage daughter’s ownership of real estate properties.

It is unclear if the Moon Blue House is using the same vetting standard.

“I am not in position to say whether the vetting was done properly or not,” the presidential official said Monday.

“But the wealth transfer was a part of the record, so it is safe to assume that we were aware of it.”

Speculation has grown that the Blue House nominated Hong because it had no other options. Earlier this month, the Blue House said it had reviewed 47 candidates to head the new ministry.

Among them was Moon’s initial nominee, Park Seong-jin, who gave up the nomination in September. Hong was the second nominee Moon chose for the job.

Many of the candidates were businessmen and they turned down the offer because they would have to place their assets into a blind trust upon entering public service. Hong, a former lawmaker, appeared to be chosen because the National Assembly easily confirms fellow lawmakers.

Hong is the seventh politician to be named to Moon’s cabinet. Five of Moon’s ministers are incumbent lawmakers and one is a former lawmaker.

Others suspect that the vetting process could have been a mere formality because Hong was a key member of Moon’s presidential campaign.