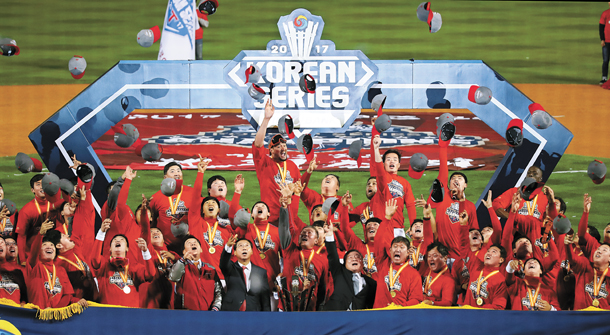 The Kia Tigers celebrate after defeating the Doosan Bears 7-6 for the Korean Series title at Jamsil Baseball Stadium in Seoul on Monday. [YONHAP]

The Kia Tigers won the Korean Series for the first time in eight years, defeating the Doosan Bears 7-6 at Jamsil Baseball Stadium in southern Seoul on Monday. 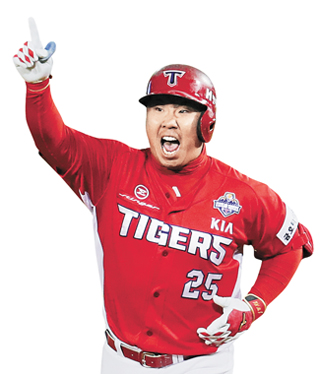 Monday’s victory marks the Tigers’ 11th Korean Series title, the most championships won by any team, and the team maintains its no-loss record.

Lee Bum-ho was the Tigers’ top scorer in the game, hitting a grand-slam home run. While the Tigers were leading 1-0 at the bottom of third, Lee got in the batter’s box with the bases loaded. Lee hit Dustin Nippert’s slider over the left fence to further extend the Tigers’ lead. Lee’s hit was the first grand slam of the 2017 Korean Series.

Lee is already a familiar name when it comes to grand-slam home runs, having hit a total of 16 in his career so far. Lee’s one hit and five at bats with four RBIs was good enough to make him the MVP for Monday’s game.

Once Hector Noesi left the mound, the Tigers’ relief pitchers Sim Dong-sub and Kim Se-hyun allowed the Bears to get within striking distance of the Tigers, only one run behind at 7-6. Kim Yun-dong was able to hold the Tigers’ lead by striking out Min Byung-hun and Oh Jae-won.

While the Tigers were leading 7-6 at the bottom of the ninth, Yang Hyeon-jong got on the mound, hoping to finish the game. Yang walked the first batter, but once Jo Soo-haeng had a bunt, the Bears quickly had their batters on second and third base, giving themselves one last opportunity to score.

After Yang walked Hur Kyoung-min, the Bears had the bases loaded with only one out and needed only a base hit to tie or potentially win the game. But Yang didn’t flinch, bringing the game to a close as neither Park Sei-hyeok nor Kim Jae-ho were able to score.

“This season is like a dream,” Yang said. “I won the regular season and had my first shutout win for the first time in the Korean Series. When I was little, I dreamed of completing the team’s Korean Series victory. And I actually did it.”

Upon completion of the game, Yang was named the MVP of the Korean Series, receiving 48 out of 74 votes. Yang’s shutout win in the second game seemed to be a great motivator behind the team’s comeback. After Noesi’s loss to the Bears 5-3, Yang made a total of 122 pitches, striking out 11 in the second game for a 1-0 shutout win. Then, Patrick Dean continued the Tigers’ stride by giving up three runs in seven innings in the third game, and with Im Gi-yeong’s scoreless pitching in five and two thirds innings, the Tigers easily dominated the Bears.

For manager Kim Ki-tai, this was his first-ever Korean Series title as either a player or a manager. Since Kim started his baseball career with the SSW Raiders in 1991, he was very unlucky when it came to winning. In his rookie year, Kim became the league’s top batter, but he only had one Korean Series appearance in 2003, against the SK Wyverns.

Kim started his career as a manager in 2012 with the LG Twins, but finished seventh in the regular season. In the following season, Kim successfully led the Twins to a runner-up finish - the Twins’ first postseason in 11 years - but came up short of advancing to the Korean Series.

After stepping down as the Twins manager in 2014, Kim returned to his hometown of Gwangju to manage the Tigers in 2015. Aside from the seventh place finish in 2015, Kim led the Tigers to the postseason last year and in his third season he successfully led the team to the regular season and Korean Series titles.

“I’m very happy,” Kim said. “A lot of things happened, but I’m very thankful that the players and the Tigers family got to win. I’m thankful for the fans for their love of Kia and I’ll never forget it.”

Kim’s third year couldn’t have been any better, as the club brought in FA players Choi Hyoung-woo, Yang and Hector Noesi. Not only that, the return of Kim Sun-bin and An Chi-hong from the military has finally allowed the Tigers to stop the Bears from winning the Korean Series title for a third consecutive year.

In eleven Korean Series victories, the Tigers have only won once at home, in Gwangju in 1987. They’ve now won at Jamsil Baseball Stadium nine times and once at Daejeon Hanbat Baseball Stadium.

The Tigers will receive 3.1 billion won ($2.77 million) as a Korean Series title bonus.