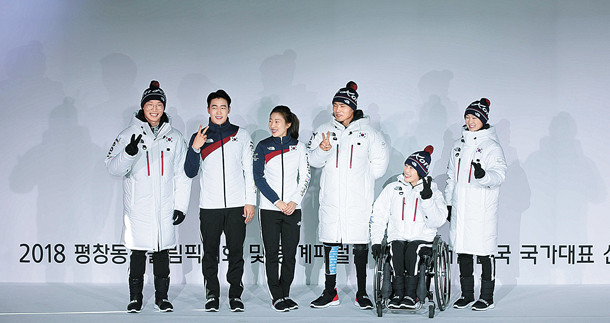 The Olympic flame finally arrives in Korea to start the 100-day countdown to the PyeongChang 2018 Winter Olympics. 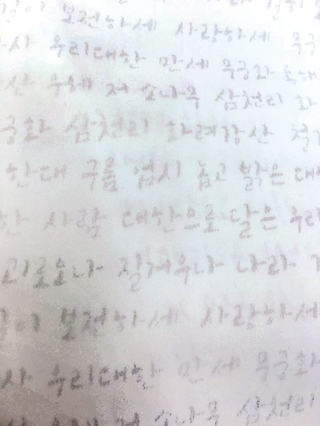 The picture shows the uniform with lyrics from the Korean national anthem. [YONHAP]

As this is the first time in 30 years, since the 1988 Seoul Olympic Games, for the Olympic flame to land in Korea, the PyeongChang Organizing Committee made a special plan to keep the flame lit while transporting it by plane. Rather than keeping it in cargo, the flame was seated in an economy seat.

Though the committee considered transporting the flame in a business-class seat, under the PyeongChang Olympics’ theme of “Let everyone shine,” it was placed in economy so every passenger could see it.

To avoid any unexpected incidents, the design of the lamp was unveiled on Monday.

Kim Yuna, the 2010 Vancouver Winter Olympic gold medalist in women’s figure skating, will be introducing the flame, which is scheduled to arrive in the morning.

Kim will arrive at Incheon with Do Jong-hwan, minister of culture, sports and tourism.

Prior to the arrival of the flame, the Organizing Committee held a media day at the Korean National Training Center on Tuesday, where Korean Olympic uniforms were unveiled.

Keeping Korea’s traditional colors of blue, red and white, the lyrics for the Korean national anthem have been printed on the uniforms.

“Since this is the Winter Olympics, we focused on keeping [the uniform] warm,” said an associate from North Face. “And we’ve provided products for Paralympic participants.”

Since the 1988 Seoul Olympics, the uniform has received a great amount of attention.

At the time, ceremonial uniforms had blue tops and white bottoms. Then, at the 2000 Sydney Olympics, a hoodie with a hat was introduced for the first time.

The Olympic participants announced that their goal is to win a total of 20 medals, six being gold, at the Games next year, and to finish fourth in the medal standing.

Korea’s all-time best finish at the Olympics was fifth overall with six gold medals at the 2010 Vancouver Winter Olympics.

“We got here after three attempts in trying to host the Olympics,” said Lee Kee-heung, president of the Korean Sport & Olympic Committee (KSOC). “We need more cheers and attention from the fans.”

In addition to unveiling the uniforms, the KSOC announced Kim Ji-yong, executive director at Kookmin University in Seoul, as chief delegate for the PyeongChang Olympics.