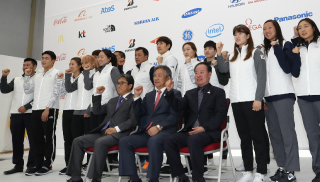 The National Unification Advisory Council proposes and advises the president on policies for a democratic and peaceful reunification of the two Koreas. The council held its 18th general meeting on Tuesday, and for the first time in the council’s 36-year history, it met in Gangneung, Gangwon, instead of Seoul.

More than 10,000 members from across the country attended. The venue was the Gangneung Ice Arena, where the PyeongChang Winter Olympics’ skating events will be held. The council is praying for a successful Games — and for a peaceful reunification, with hopes that North Korea will respond to inter-Korean talks.

The Winter Games will open on Feb. 9, 2018. We remember the emotional moment six years ago when Pyeongchang beat France’s Annecy and Germany’s Munich to host the event. A few days ago, the torch was at the Temple of Hera in Olympia, Greece, and football star Park Ji-sung ran as the torchbearer, reminding us that the PyeongChang Olympics are upon us.

The PyeongChang Olympics will be held 30 years after Seoul hosted the Summer Games in 1988. The event was an opportunity to enhance Korea’s status and turned the fate of the nation. The PyeongChang Games will also be a chance to revive the nation’s spirit. We are reminded that hosting the 2002 Korea-Japan World Cup helped clear the long shadow of the 1997 foreign currency crisis.

The PyeongChang Olympics will complete the grand slam. The Winter Games are a golden opportunity unlikely to come again in this century. Even the United States and United Kingdom have yet to make the grand slam.

I believe the 2018 Winter Olympics will play a buffer role as tension has elevated over the North Korean nuclear threat. North Korea’s participation could ease the tension. We still have time and opportunities in the next 100 days.

Before the 1984 Los Angeles Olympics, 1986 Seoul Asian Games and 1988 Seoul Olympics, there had been various moments of tension on the Korean Peninsula, but breakthroughs were found through sports. North Korea initiated an inter-Korean athletic meeting to form a single team for the LA Olympics, Seoul Asiad and Seoul Olympics, and Pyongyang even requested the International Olympic Committee allow North Korea to share the hosting of the 1988 Olympics.

The two Koreas made joint entrances during the opening ceremonies of nine international sporting events. In this journey of history making, tensions between the two countries did not escalate seriously.

North Korea had nearly ignored the PyeongChang Olympics, but lately, it has sent a positive message as North Korean IOC member Chang Ung has stated sports and politics are separate. Some believe the possibility of North Korean participation is growing and that North Korea may be working on selecting athletes. Recently, North Korea submitted an application to participate in the Paralympics to be held right after the Winter Games. A breakthrough may be coming.

The official slogan of the PyeongChang Olympics is “Passion. Connected.” The world will come together in Pyeongchang, and there is no reason for South and North Korea to turn against each other. Both sides need to show how we share passion.

The participation of North Korea will also be a clue for resolving tension between the United States and North Korea. Now, we need to remember the emotional moment in 2011. Let us hold up the torch for a successful Olympic Games.

*The author is a vice chairman of the National Unification Advisory Council’s Seoul branch and former president of the Korea National Red Cross.