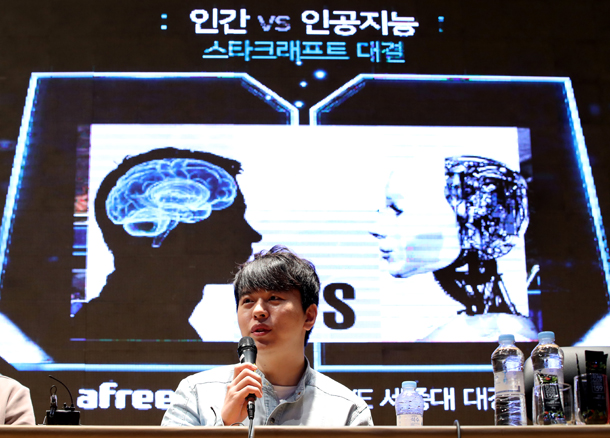 Song “Stork” Byung-goo, a professional gamer, talks to reporters before a StarCraft match against artificial intelligence bots on Tuesday at Sejong University in Gwangjin District, eastern Seoul. While amateur players were dominated by the machine, Song came out of the matches with a 4-0 record. [YONHAP]

Humans and artificial intelligence faced off once again on Tuesday for a round of StarCraft hosted by Sejong University’s Seoul campus in Gwangjin District, eastern Seoul, where experts bested computers in a translation competition earlier this year.

While computers defeated amateur players, they were no match for professional gamer Song “Stork” Byung-goo, who’s considered one of the best StarCraft players in the world.

A total of three human players — two amateurs and Song — went head-to-head against four bots including MJ Bot, developed by a research team from Sejong University, and Cherry Pi, created by Facebook.

The match was highly anticipated by AI experts around the world. Even AlphaGo-creator DeepMind, which took down a number of human Go masters including Korea’s Lee Se-dol, picked the strategy game as the next step in human-AI competition. Many professional players, however, remained skeptical due to the complexity and spontaneity of StarCraft, which makes it difficult for computers to anticipate their opponents’ moves.

“We don’t expect to defeat a professional gamer,” said Kim Kyung-joong, a professor of computer engineering at Sejong University that led the team to develop MJ Bot, prior to the match. “While AlphaGo was able to raise the level of its competitiveness through learning from data, there wasn’t sufficient data for the game of StarCraft for our bot to educate itself.”

Professor Kim explained that his team had to create separate modules for the architecture of the bot including production, combat and decision making — all essential elements of the game. Kim also showed a hint of confidence that his machine would do well against non-professionals.

The first showdown between the first amateur player and MJ Bot was a neck-and-neck bout, with the human player eventually taking the win after a hard-fought battle.

It was apparent, however, that the AI player had the upper hand over human players in some aspects. 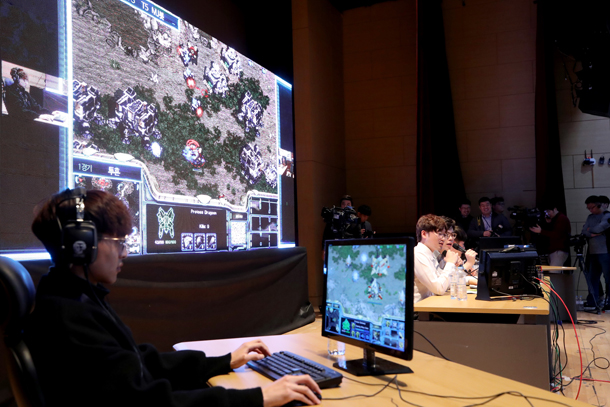 At one point during the first game, the actions per minute (APM) of the bot reached 20,000, which means the bot was able to carry out multiple actions simultaneously at a pace impossible for any human players. At such APM, for instance, a bot could command a number of units to go in different directions while also constructing buildings at the same time, an impossible task even for pros.

APM measures a player capacity to handle different elements of the game by how fast the player can tap and click on the mouse. It is one of the important metrics that determines the skill of a player. A professional gamer’s APM range would not be higher than a few hundred.

The second game between Kim and Zzzk, a bot from Australia, finished in less than 10 minutes, with the AI grabbing an easy victory. By the end of the sixth match, the bots had taken five victories while conceding only one game against the two amateurs. The match between Song, the winner of the 2007 World Cyber Games, and the AI bots had a different dynamic.

Song did not lose a single match against four bots — which included Zzzk from Australia and Tscmo from Norway, the winner and runner-up of a recent AI StarCraft match held by the Institute of Electrical and Electronic Engineers. Facebook’s Cherry Pi threw in the towel about 10 minutes into the match, which was the final contest of the day. After the game, however, Song said he was quite impressed with the bots’ ability.

“The first game against MJ Bot, I felt as if I was playing against a human player,” said Song. “Its strategy was very well organized, even blocking the entrance at the early stage of the game to prevent my units from entering.”

“I think the level of completeness of the bots would be much higher if professional gamers participated in the development,” Song added.
Professor Kim and his team agreed, admitting that “right now, it’s difficult for AI to flexibly react to the situations outside of the scope of a given scenario.”

“AI may be better than humans in terms of control, but that’s useless during the early part of a match when the available resources are limited,” Kim further said.

“Decision making is the most important element,” Kim added, who said reinforcement learning technology, considered the ultimate form of machine learning that allows computers to determine the most ideal behavior in given situations through the process of trial-and-error, may hold the key to further enhance the system to compete against pros in a setting such as StarCraft.