KT teams up with Intel for 5G Olympic services

KT teams up with Intel for 5G Olympic services 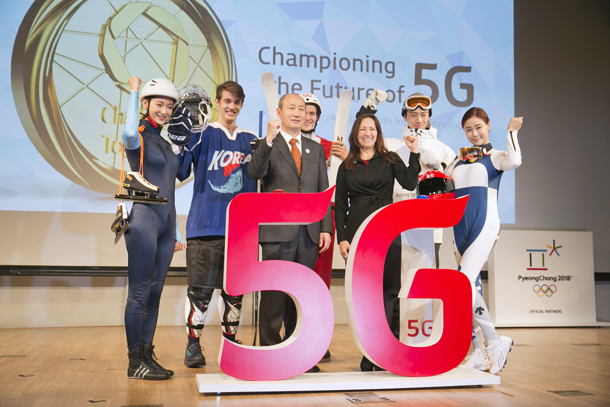 Oh Sung-mok, president of KT’s network division, front left, and Sandra Rivera, senior vice president and general manager of the Network Platforms Group at Intel, on his right, pose for a photo at KT Square in central Seoul on Tuesday. [KT]

KT, which is providing telecommunication services for the 2018 PyeongChang Olympic Games, announced a partnership with U.S. chip giant Intel on Tuesday that will introduce a 5G network at the international event.

Korea’s first Winter Olympics are now only 100 days away.

While companies pay for exclusive marketing rights for specific aspects of the Olympic Games, KT had been blamed for infringing on other sponsors by promising a range of 5G-powered services such as 5G-powered autonomous cars and virtual reality services. Hyundai Motor paid for marketing rights related to autonomous driving at the games.

Joint-marketing with Intel enables KT to officially promote its engagement in immersive entertainment services it already introduced, like “Time Slice,” which allows viewers to see videos of figure skaters from various angles.

“For centuries, the Olympics has been the premium forum for testing limits of what is possible,” said Sandra Rivera, senior vice president and general manager of the Network Platforms Group at Intel, who was also at the briefing. “The world’s first Olympic 5G network delivered by KT enabled with Intel technologies will allow attendees groundbreaking access to wireless broadband and gigabit speeds, ultra-low latency video capture and live-stream multi-view data.”

Under the partnership, the two companies will run a joint marketing space in KT’s promotion center in Gangneung Olympic Park, one of the venues for the PyeongChang Olympic Games. Various futuristic technologies will be there for visitors to experience. They will get a glimpse of how the high-speed network could reshape not only sporting events but people’s daily lives.

In the meantime, KT will participate in the Olympic torch relay for the upcoming event. It is the first time a telecommunications partner in the Olympics has taken part in the torch relay, according to KT.