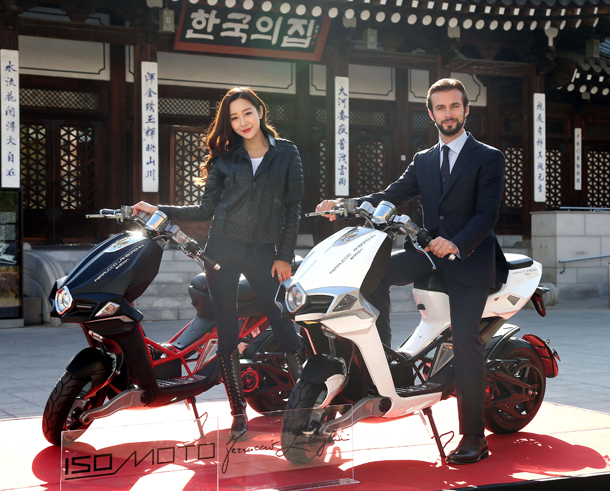 The two companies have collaborated on the special-edition model for the past two years. Iso Motor is a brand owned by the Lamborghini family.

“After meeting Brian Park, I personally asked my father to follow this project and start a new chapter in the EV business,” Lamborghini, a former motorcycle racer, said.

“We are not only focused on two-wheeled scooters, but we also want to launch bigger electric vehicles in the future.”

The Iso Motor scooter is able to run 65 kilometers (40 miles) on a single charge, but can also extend its distance to 150 kilometers with additional options.

It can be charged with a 220-voltage plug found in most Korean homes, and takes three to four hours to fully charge. The scooter can reach a maximum speed of 80 kilometers per hour.

In the future, Lamborghini and GPCC Korea hope to revive the luxury brand’s Town Life minicar with an electric upgrade.

“We are doing R&D for the Town Life minicar scheduled to launch in Korea in 2019,” Park said. “It will be able to drive up to 100 kilometers on a single charge, and we plan to launch the electric minicar in China and other Southeast Asian countries.”

However, he said, “We are not thinking about the North American market because a slow-moving vehicle is not suitable for the local driving environment.”

The Iso Motor scooter will go on sale in Korea before the end of the year with a sticker price of $4,000. It will be simultaneously launched in Japan, Taiwan and Europe.

Ferruccio Lamborghini’s grandfather of the same name founded the eponymous luxury carmaker in the 1960s but sold the company in the 1970s due to financial difficulties. The brand is now owned by German automaker Audi.