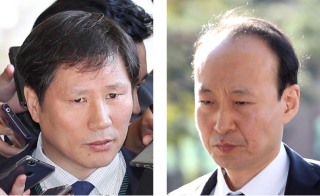 “We detected suspicions that officials of the Park Blue House received money from the National Intelligence Service during her presidency,” said a source from the Seoul Central District Prosecutors’ Office.

According to the prosecution, about 10 places were raided, including the homes and offices of three former directors of the NIS, Nam Jae-joon, Lee Byung-kee and Lee Byung-ho, as well as the home of Cho Yoon-sun, former political senior affairs secretary - all of whom held top posts during Park’s presidency, which ended in impeachment in March. All suspects were barred from leaving the country.

Quoting testimonies of Lee Heon-su, former chief of strategy coordination at the NIS, as well as other officials, the prosecution claims that since the start of the Park administration, the NIS diverted about 1 billion won each year from its special expense accounts to the Blue House. Special expense accounts exist for almost all government offices for activities that require confidentiality. Because no receipts are required, the accounts are often used for non-official purposes.

Lee served as the NIS’s chief of strategy coordination from April 2013 to last March, stepping down when Park was removed from office. During his time there, he oversaw budgets and appointments within the agency. According to the prosecution, Lee told investigators that he gave money from the special expenses accounts to Ahn from 2013 to 2015 and to Lee from 2015 to this year.

“The bribe amounts are not small,” the source at the prosecutors’ office said. “They are large enough for the court to issue search-and-seizure warrants for three former NIS heads and a former senior political secretary and to allow for the arrest of former presidential aides.”

“We have enough to prove the charges,” he said.

Along with Jeong Ho-seong, another former personal secretary to Park, Ahn and Lee were nicknamed the “doorknobs to the president” for their control over access to Park. Jeong is currently standing criminal trial on charges of leaking confidential government information to Choi Soon-sil, Park’s longtime friend who held no public office, at Park’s behest.

The prosecution is currently investigating where the funds were used. If the prosecution finds evidence that money from NIS was used to support candidates of the then-ruling party for the June 2014 local elections and April 2016 general elections, lawmakers of the Liberty Korea Party, particularly members of the pro-Park faction, may face an investigation.

Park is currently undergoing a criminal trial for receiving bribes from conglomerates in return for political favors. If there is reasonable doubt that Park had ordered the misappropriation of the NIS funds, or was aware of the diversion, the prosecution can indict her with additional charges.