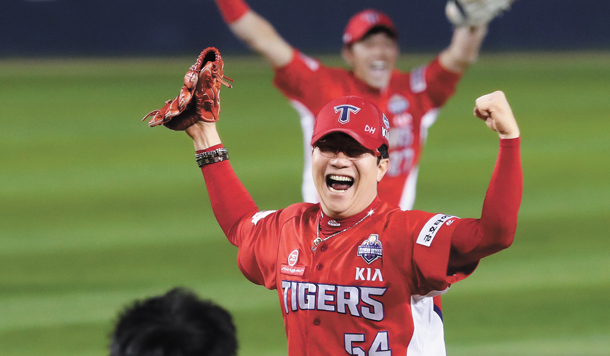 As a Gwangju native, Yang Hyeon-jong’s heart has always belonged to the Kia Tigers. Even when he is asked about his goals as a professional baseball player, Yang has always said “to become a historical player in Tigers’ history.”

Yang, who was born in Gwangju on March 1, 1988, grew up watching the Haitai Tigers, now the Kia Tigers. Having graduated from Hakseong Elementary School, Dongsung Middle School and Dongsung High School, all in Gwangju, Yang joined the Tigers in 2007.

Over the last 11 seasons, Yang slowly developed to become the Tigers’ dominant left-handed pitcher. After years of hard work, on Oct. 30 Yang finally achieved his dream of becoming a Tigers legend. He closed the final game of the Korean Series, securing the team’s 11th championship victory. While the Tigers were at risk of tying the game in the last inning, Yang stayed calm and threw a fastball at a speed of 146 kilometers (91 miles) per hour, which he has the best control over.

“Since there was nowhere for me to hide, I believed in my fastball and threw it as hard as I could,” Yang said.

Since Monday’s game was the first elimination game of the Korean Series, while the Tigers were leading 7-0 in the sixth innings, the KBO started the voting for the Korean Series MVP. Up until then, Roger Bernadina was the most likely player to win the award, as he had a 0.526 batting average with one home run and seven RBIs from the five Korean Series games.

But once Hector Noesi fell apart at the bottom of the seventh and allowed the Bears to get right behind the Tigers at 7-6, Yang, who was scheduled to start in Game 6, started to warm up in the bullpen.

“”I only thought that I had to stop giving out runs,” Yang said. “I would have had a lot of pressure if we lost after having me, starting pitcher for Game 6, as a closer. I just thought that I shouldn’t waste the seven runs our players scored throughout the game.”

After picking up a win and a save in the Korean Series, Yang earned 48 votes out of a total of 74 votes, out pacing Bernadina.

Last season, Yang became a free agent (FA) player and made an attempt to play overseas. While Yang was given great offers from Japanese clubs, the Tigers signed a four-year contract with Choi Hyoung-woo at 10 billion won ($8.9 million), the first FA player to ever sign a contract over the 10 billion won mark. Though the Tigers wanted to keep Yang on the team, signing Choi at such a high price made it hard to justify.

But Yang, who has only ever played for the Tigers, agreed to sign a one-year contract at 2.25 billion won, just because “I want to win with my teammates, who I’ve played with for such a long time.”

Now that the season and Yang’s contract have ended, his contract is expected to be a lot more expensive. In the 2017 season Yang picked up 20 wins and six losses with a 3.44 ERA, making him the most likely player to win the regular season MVP. Winning the regular season MVP will allow Yang to set another record this season, as there has never been a single player that was named MVP for both the Korean Series and the regular season in the history of the KBO.

Though Yang’s accomplishments will undoubtedly open doors in his professional career, he seems set on staying in Gwangju.

“I love the Tigers,” Yang said. “Rather than foreign teams or other teams [in the KBO], I’ll consider Kia as my first option.”