Torch will travel across land, sea and underwater

Torch will travel across land, sea and underwater 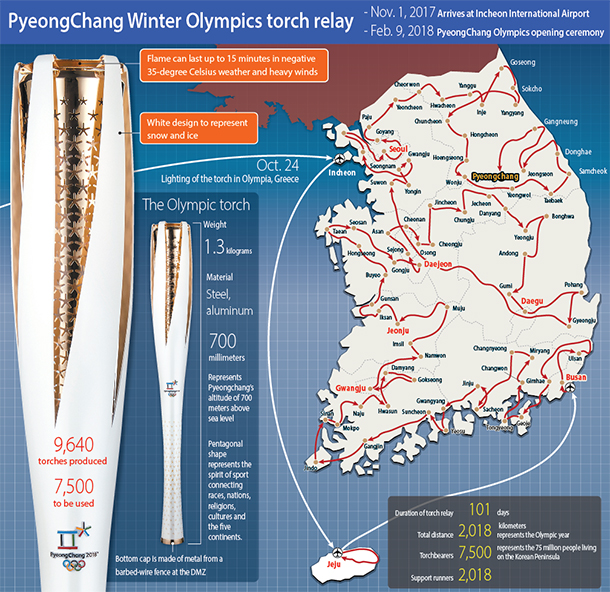 The torch relay for the 2018 PyeongChang Winter Games began in Korea on Wednesday with the arrival of the Olympic flame. 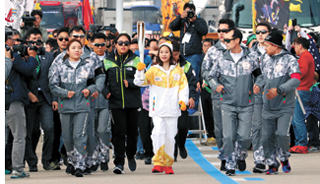 Figure skater You Young carries the torch for the 2018 PyeongChang Winter Olympics while crossing the Incheon Bridge on Wednesday. [YONHAP]

The Olympic flame was ignited at the Temple of Hera in Olympia, Greece, the ancient site of the Games, and arrived at Incheon International Airport on Wednesday after traveling in an economy-class seat. It was kept in a lamp specially designed to keep it burning on the 15-hour journey.

The torch relay has been a highlight of the Olympics since it was first conceived at the 1936 Summer Games in Berlin. The first winter relay was held in 1952 for the Games in Oslo.

Host countries have traditionally used the event to showcase their culture.

For the 2014 Winter Olympics in Sochi, Russia, the torch was flown to space by Soyuz rocket to the International Space Station.

And in Vancouver, for the 2010 Winter Olympics, dog sleds, snowmobiles and seaplane were mobilized for transport.

In Tongyeong, South Gyeongsang, the flame will travel aboard a turtle ship, a Korean war vessel used during the Joseon Dynasty. In Gokseong, South Jeolla, the torch will go on a steam train, and in Samcheok, Gangwon, the relay will resume on a tourist rail bike that travels over the ocean.

To highlight cutting-edge technology, Hubo, a humanoid robot, will walk with the torch in Daejeon on Dec. 11. In Jeju, the island’s famous female divers will take the flame in a safety lamp underwater, where it will be transferred to Crabster, a six-legged robotic crab designed to walk the ocean floor.

You was the very first to carry it, walking 200 meters (656 feet) on the Incheon Bridge. Although You, 13, is too young to compete in the PyeongChang Olympics, she is considered a favorite for women’s figure skating at the 2022 Winter Olympics in Beijing, as she recently became the youngest national champion in the ladies’ singles event, at age 11.

“I feel so good and so honored to be the first one,” You told Yonhap. “I am just so happy right now. I’ll remember this day forever.”

Tradition dictates that the Olympic flame must remain lit until the end of the Games. To maintain the flame under severe weather conditions, the torch was designed with resistant technologies.

The flame is able to last up to 15 minutes at negative 35 degrees Celsius (negative 31 Fahrenheit) and withstand high winds of up to 78 miles per hour, the Olympic committee said. The torch was designed in consideration of Pyeongchang’s average temperature of negative 4 to 5 degrees Celsius and biting wind in February.

The secret to maintaining the Olympic flame is the torch’s four-wall combustion compartment. Since the walls surround the compartment, the flame can keep burning under severe weather conditions.

In addition, the torch has been designed to allow gas to circulate inside and spread the heat. A technical team from Hanwha Techwin, an aeronautics company, participated in the development of the torch’s burner.

The torch is made of white porcelain to represent snow and ice. Pieces of metal from barbed-wire fence at the DMZ were used to make the torch’s bottom cap, as a gesture to peace.