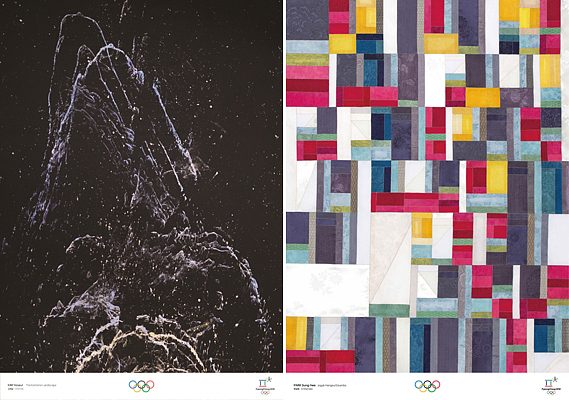 The “Art Posters for the Olympic Winter Games PyeongChang 2018” exhibition features eight art posters which will be used to promote the upcoming PyeongChang Olympics. Left, “The Extreme Landscape” by Kim Ye-seul and right, “Jogak Hangeul Eeumbo” by Park Sung-hee. [KCDF]

The 2018 PyeongChang Olympics are now less than 100 days away, and to celebrate, the Ministry of Culture, Sports and Tourism is hosting the “Art Posters for the Olympic Winter Games PyeongChang 2018” exhibition at the National Museum of Modern and Contemporary Art (MMCA) in central Seoul from Nov. 2 to Dec. 3 in association with the Korea Craft & Design Foundation (KCDF).

Eight posters are on display in the museum’s Gallery 8, as well as videos showing of how each piece was made, and a collection of Olympic posters since 1912.

Chosen among 205 submissions that were received during an open competition that wrapped up in July, the eight winning works will be used as official posters for the PyeongChang Olympics, and will be registered as cultural assets in the International Olympic Committee’s (IOC) archive of posters, which dates back to the 1912 Stockholm Olympics.

“The Olympic torch has arrived in Incheon and is coming our way,” said Roh Tae-kang, Vice Minister of Culture, Sports and Tourism. “For Korea, the Olympics have already begun. There’s not many chances for art to combine with sports, and Olympics is one of the rare opportunities. These posters will become a cultural asset of the Olympics, and I hope that the PyeongChang Olympics will be the best in history.”

There were four main criteria used in choosing the winning posters: artistic value; presenting the idea of the Olympics in a new light; subtly expressing the soul of Korea; and also depicting the beauty of Gangwon Province, where Pyeongchang lies.

The eight teams who successfully captured each of the elements have all been awarded 10 million won ($8,970). The winners are: Kim Jong-wook, Kim Ye-seul, Jeon Chang-hyun, Park Sung-hee, Kim Joo-sung, Kim Jae-young, Hong Hyun-jung with Hwang Su-hong, and Ki Eun with Ha Dong-soo.

The MMCA will sell limited editions of the posters at the museum’s gift shop during the exhibition.