Showing the dramatic side of ‘Anna Karenina’ : German choreographer’s interpretation of the classic tale takes the stage

Showing the dramatic side of ‘Anna Karenina’ : German choreographer’s interpretation of the classic tale takes the stage 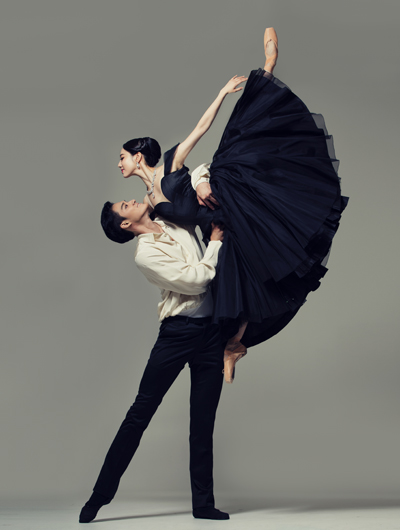 The Korean National Ballet will perform a ballet adaptation of Tolstoy’s “Anna Karenina” at the Seoul Arts Center until Nov. 5. [KOREAN NATIONAL BALLET]

Tolstoy’s masterpiece “Anna Karenina” is perhaps one of the world’s most popular works of fiction. It has been adapted into more than 20 films, a TV series, operas, musicals and ballets, including the most recent one choreographed by German choreographer Christian Spuk.

The story revolves around the Countess Anna Karenina, who is married to Count Karenin, and whose life becomes a mess after she falls in love with Count Vronsky. Although she is eager to be with her new lover, she feels insecure about the social norms and moral laws she is violating as she sees herself being shunned and isolated from the upper class.

For Spuk, who recently visited Seoul to stage his version of “Anna Karenina” with the Korean National Ballet (KNB), this classic story acted as a muse not only because it’s an “amazing and attaching book,” but because the story, despite being written in 1878, “is still real today.”

“It still points out conflicts in our society today,” said Spuk, during a press conference for the upcoming production held at the Seoul Arts Center in southern Seoul last week.

“In order for a woman to live [with] her love, she has to make big decisions, some of them maybe emotional, but some also rational. She loses her social standard, her family and in the end, her life, in order to live love. I think it’s still happening a lot in our society throughout the world.”

Spuk’s version has been praised by critics worldwide since it premiered in 2014 in Zurich, with some saying that it is a “feast for the eyes.” To make the stage and the costumes as luxurious and extravagant as they have been in many of the story’s film adaptations, Spuk worked with renowned costume designer Emma Ryott.

For the ballet’s music, Spuk used works by Russian composer Sergei Rachmaninoff, instead of Tchaikovsky, which is commonly used in other productions of “Anna Karenina.”

“I listened to all of the music by Rachmaninoff, which took me three days, and decided to use his music, as it is very strong and captures the Russian flare of this production,” said Spuk. 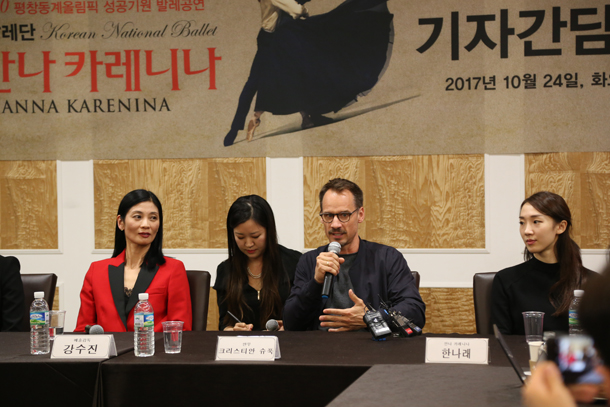 The KNB, which is led by Kang Sue-jin, decided to stage this romantic ballet to celebrate the upcoming 2018 PyeongChang Winter Olympic Games. For the production, the government provided about 2 billion won ($1.79 million) to support the state-run company. The performance kicked off its five-day run at the Seoul Arts Center on Nov. 1, and it will again be staged in February at the Olympic Art Center in Pyeongchang, Gangwon.

“Some people told me, and I also thought it as well, that a government-funded production to celebrate the PyeongChang Winter Olympic Games should be a Korean-made work,” said Kang. “But I believe it is also important to show the international audience that ballet in Korea is up to international standards. In order to do that, Spuk’s ‘Anna Karenina’ is a perfect choice.”

According to Spuk, his choreography for the piece requires complex techniques and the dancers have to present something that is more than only beautiful dancing.

“Quite often in the classical ballet world, they use stories like ‘Giselle’ or ‘Romeo and Juliet’ to present beautiful dancing. So the story is not that important - it’s only important how beautiful the dancing is,” he said.

“But for my work, I’m trying to change this notion - I can work with beautiful dance, beautiful dancers and complex choreography, but the [most important] thing for me is to convey the story. That’s why I keep telling the dancers at the KNB that we are not doing a ballet, we are staging a play.”

The big challenge for the dancers at the national ballet, says Spuk, is to not only present beautiful dancing and complex techniques, but to “bring the character across, the situation across, while making sure that the audience feels something beyond that it’s just beautiful.”

For this “complex role,” the company and Spuk picked three ballerinas, including principal dancers Kim Li-hoe and Park Seul-ki and soloist Han Na-rea, to alternate performing as Anna Karenina.

“For me, it’s very exciting to see those three ballerinas have a completely different approach to the character and to see each of their different styles - it’s heaven as a choreographer,” Spuk added.