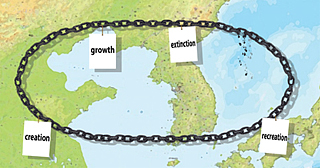 As China and other neighboring powers increasingly expand their influence, Korea’s national strength has been stagnant for a while. The international community had once named Korea as a country with promising growth in the 21st century. But in the 2000s, as expansion and growth slowed, Korea lost its restorative force and drive. What were the fundamental causes?

Many analysts believe it is a combination of pathological phenomena in politics, economy and society causing degeneration in the overall ecosystem and leading to a decline in national power.

A report from the North East Asian Research Institute shows that the creation-growth-extinction-recreation cycle of Korea’s economic ecosystem is broken. Collusion of varying degrees is rampant, and the barriers to entry are thick. As a result, overall connectivity, expandability, dynamism, diversity and flexibility are weak, bringing down the entire ecosystem.

In the past two decades, Korea has been under liberal and conservative administrations for 10 years each, which has driven state administration into extreme ideological struggles and divided national opinion. Two major economic crises were not used as opportunities for national restructuring, but were settled with temporary measures.

An immature democracy, a bureaucracy that has become a “maintenance manager,” companies that focus on survival and avoid risk-taking, and a stiff civil society have all created a loose state structure that causes discord and weakens the country’s ability to solve problems.

Meanwhile, all actors — politicians, bureaucrats, businessmen and labor unions — have lost their sense of responsibility and ownership in the national community, and have instead focused on their survival. In the backward environment of a presidency that changes every five years, all parties have learned unique survival tactics and lost all long-term vision with their obsession over the present.

As the phenomenon continues, various pathological symptoms become structural. And since they are not treated for an extended period of time, the overall ecosystem sinks. In the political ecosystem, people have lost trust in party politics and parliamentary politics.

As a result, citizens have gathered in the square, and politics is trapped in the structure of ideological collision. Many issues that should be decided through communication and cooperation have been passed to prosecutors.

Ideological politics has made management and labor hostile when they should be working together, and political groups that adhere to one side have ridden on a unicycle for five years. Politics has abandoned economic pathological phenomena in political collusion while bureaucrats avoid dangerous surgical operations.

Meanwhile, Korean society has become stratified, divided over ideology and valuing connection and relationships. These characteristics create a unique social ecosystem. People live with the same class and consume information exclusively. As the circulatory system of the social ecosystem is blocked, people are trapped in their stratified interests. The new rich become the mainstream of society and focus on defending their interests rather than values. In this atmosphere, a generational gap in the perception of reality grows wider.

As people are reluctant to have children for practical reasons while life expectancy increases, Korean society is rapidly aging. As the positive and adverse effects of the information age spread together, fake news has become rampant. With improved human rights conditions and liberal culture, law and order become loose and public authority weakens. This is the bare face of Korea’s social ecosystem.

To improve its health, we need to reform the party system and electoral system to restore grass-roots democratic political culture. The prevailing and excessive political and ideological influence in the economy should be removed, and the vast collusion structure needs to be dissolved to make society fair for competition and communication.

The first step is for politicians to give up their established interests and set examples. Just as Germany attained reform under Chancellor Gerhard Schröder, Korea can, too.