Getting creative to revitalize albums : Lucid Fall and Park Hyo-shin rethink how to present their latest music

Getting creative to revitalize albums : Lucid Fall and Park Hyo-shin rethink how to present their latest music 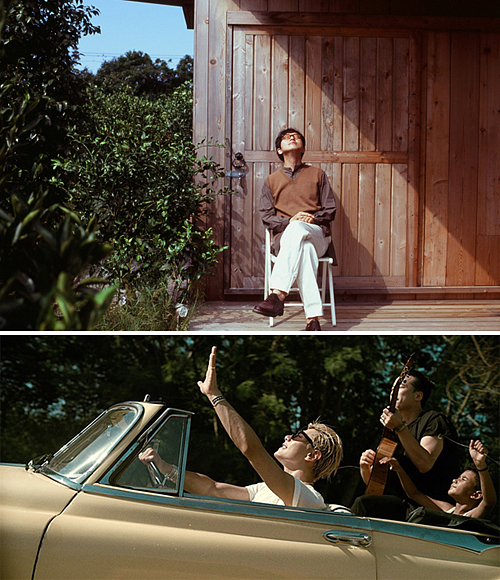 Top: Singer Lucid Fall has published a collection of essays titled “Living small and tiny farm,” together with his eighth album. Above: Singer Park Hyo-shin released a 68-minute long music video titled “Beautiful Tomorrow,” featuring the tracks from his seventh album, “I am A Dreamer.” [ANTENNA, GLOVE ENTERTAINMENT]

How can you extend the life of an album? With their latest releases, singers Lucid Fall and Park Hyo-shin have each come up with their own answers to this question.

Lucid Fall’s eighth album, “Living small and tiny farm” was released along with an essay book of the same name, in an effort to attract fans curious to learn more about the artist and his work.

Park Hyo-shin released a 68-minute-long music video titled “Beautiful Tomorrow” which uses all of the tracks from his 2016 album “I am A Dreamer.”

In the fast-moving music industry, where the top songs on the charts change on an hourly basis, how can musicians make an impact with their newest work? JoongAng Ilbo, an affiliate of Korea JoongAng Daily sat down with the two singers to discuss their creative approaches to breaking through in a crowded market.

Lucid Fall has long been interested in creating value with his physical releases. He made his debut as a part of the indie band Misoni in 1998, and has released an album every two years since. As a musician, he prefers the physical album, but he was never sure if his fans wanted to hold the album in their hands as much as he did.

His sixth album, “Flowers Never Say” (2013) was released on a USB drive and his seventh album, “Someone, Somewhere” (2015) was sold on a home-shopping network along with oranges that he had grown himself. The album also included storybooks, postcards and a certificate of authenticity.

With his most recent album, available along with a book of essays written by the singer, the physical CD is attached to the back cover. “I thought, I should give fans more because, especially these days, people can just listen to music without actually buying the CD,” said Lucid Fall.

“Living small and tiny farm” is the first book of essays written by the singer, but he has previously published novels and books with his lyrics. The singer has also translated stories from around the world into Korean. The collection of essays that comes with the album covers the singer’s two-year process of making music.

Although listeners are rewarded with a book when they go out and buy the album, the quality of the music is what most fans will be interested in when they pick up Lucid Fall’s latest.

On the album’s lead track, “Salut,” he greets listeners and on “Fall Forest,” he tells the story of how he became closer with trees and bugs. Pictures of his daily life on Jeju Island give listeners a look into what provided inspiration during the songwriting process.

“There are so many things that I haven’t tried,” said Lucid Fall, who moved to Jeju in 2014. He started growing oranges with a recipe he created on his own, and has been certified for pesticide-free farming. As a former chemist, he sometimes makes fertilizers made of brown rice vinegar to provide more calcium to his oranges.

Last year, Park published a 218-page photo book to go along with his seventh album, “I am A Dreamer.” Since this was his first album in six years, he also wanted to create a music video to mark the occasion. He ended up making an hour-long film, featuring all of the tracks from the album.

Other artists such as the duo AKMU and boy band BTS have released footage of their performances online, but it is rare to create a film to release in theaters in support of an album.

The movie shows the singer preparing for a concert he held last year, as well as footage from the performance. It also includes a look at a trip to Cuba that the singer took with Jung Jae-il, another singer from his agency, in order to make music in a new place.

At one point in the film, Park says that, “Music completes me, yet at the same time, presses me down like shadow.”

The film depicts the process of overcoming the pressure that the singer felt as he realizes the pure pleasure that music gives him. Although the plot is not very original, the music that plays throughout the film allows for the film to avoid cliches.

“In the future, Park will provide his fans with more film content, as the singer himself enjoys watching movies and is always looking to try new things,” said an insider at Glove Entertainment, Park’s agency.

At an event on Oct. 26, Park said, “I have experienced a new kind of energy because the music comes with video footage. I wish the way I feel the music in a new way can be properly conveyed to the audience.”

Professor Kim Young-jae from the Hanyang University Department of Culture Contents said, “The music industry has grown, but profit has reduced, [so] those projects are part of efforts to diversify additional content [beyond the music itself]. These unique approaches to enhance albums enrich the consumer experience and drive profits at the same time.”