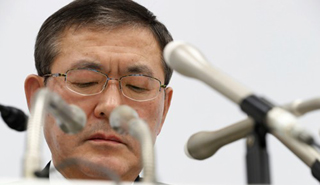 Monozukuri is the Japanese craft of striving to make the best products. For decades, the Korean manufacturing sector envied the Japanese idea. The concept was considered the force that allowed Japan to produce high-quality products.

Japanese carmaker Subaru’s Yasuyuki Yoshinaga mentioned the term on October 27. “I am so ashamed that my company has become a cause for tarnishing Japanese monozukuri.” For over 30 years, unqualified employees checked the completed cars, and the company was considering recalling 350,000 cars.

Nissan decided to recall 1.2 million cars for the same reason. Kobe Steel, the third-largest steel manufacturer in Japan, is found to have manipulated the quality data for steel and aluminum, and the U.S. Department of Justice requested documents related to fake data. The scandal is becoming an international issue as its customers include U.S. companies such as GM, Ford and Boeing.

Airbag manufacturer Takata went out of business after concealing defective airbags that led to accidents. The New York Times ran a cover story on falling trust in Japanese manufacturers. Here we need to look at the situation calmly.

First, inspecting completed cars is a regulation only applied to domestic cars in Japan. The Japanese government requires “qualified” employees to conduct a final check, but the specific qualifications were left to the carmakers to decide. Yoshio Tsukuda, head of the Tsukuda Mobility Research Institute, said that companies are likely to consider the process a formality as domestic sales in Japan are decreasing. The regulation that is not required in other countries — and is not thoroughly monitored — has caused the problem.

Second, I cannot say that Korean corporate culture is so different from that in Japan. According to Governance for Owners, a corporate watchdog organization in Japan, Japanese companies tend to obstruct monitoring and criticism by employees or external independent groups. Lawyer Noguo Kohara, who specializes in corporate issues, said that the culture of concealing quality manipulation for the profit of the organization is a routine practice. It sounds familiar.

Third, with the digital revolution, it is no longer possible to rely on people to produce quality. Korean companies rely on smart factories using big data and need to pursue digitalization further.

Nevertheless, Japan is trying to find the root of the problem that goes back decades. With the monozukuri spirit, the data from 30 years ago is dug up to identify the problems. Of course, it is painful that damage is already done.

The catastrophe Japan is experiencing provides a case study for Korean industries. We can learn from Japan’s mistakes.