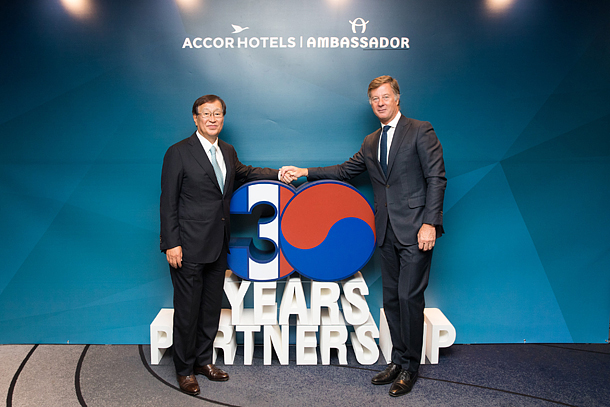 Ambassador Hotel Group said Wednesday it will open nine more properties by 2021 with AccorHotels, a France-based hospitality group that runs Novotel and Ibis.

The two hotel chains celebrated the 30th anniversary of their partnership at the Grand Ambassador Seoul in central Seoul. The relationship between Korea’s oldest hospitality brand and the European hotel giant started in 1987 just before the 1988 Seoul Olympics, an event that attracted many global hotel chains to enter Korea.

“We currently have 23 operations nationwide in six cities,” said Suh Jung-ho, chairman of the Ambassador Hotel Group. “The plan is to expand this number to 32 by 2021.”

In the last three decades, the partners developed a diverse portfolio by bringing in some of AccorHotels’ sub-brands - from the premium Novotel Ambassador to Ibis Ambassador, which later created a new segment of business hotels in Korea.

In 2006, they launched a joint venture, the Accor Ambassador Korea, which provides hotel management solutions.

The partners’ next project is Accor’s Fairmont Hotel in Korea, scheduled to open in Yeouido, western Seoul, in 2020. Ambassador hopes this will expand the group’s local portfolio into luxury hotels.

AccorHotels Chairman and CEO Sebastien Bazin said that the two companies could operate “close to 100 hotels [in Korea] in the foreseeable future.”

Korea’s tourism industry was badly affected this year as the flow of Chinese tourists was choked off by Beijing after the deployment of a U.S. antimissile system. As hotels struggled, concerns arose in the industry that the market was saturated.

“It’s true that competition is tough [in the local hotel market] and I believe it will continue to be so in the next two to three years,” said Suh. “But in the long run, I think local tourism has a future considering the ongoing increases in incomes among Koreans and the adjacent Chinese market.”

Bazin added that the global emergence of people who can afford travel and the rise of low cost carriers will naturally result in a greater number of tourists worldwide, including Korea.