Ivanka is skipping visits to Seoul and Beijing

Ivanka is skipping visits to Seoul and Beijing 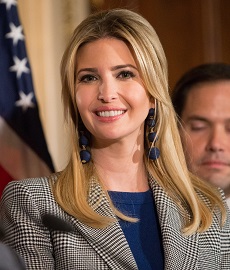 Ivanka Trump, who was supposed to accompany her father President Donald Trump on his Asia trip next week, canceled plans to visit Korea and China next week.

Seoul officials had been anticipating Ivanka Trump’s visit, hoping she would be another means of directly sending a message to her father in her capacity as both first daughter and one of his most trusted senior advisers.

The 35-year-old businesswoman and television personality and her husband Jared Kushner are part of the president’s inner circle, and the Korean government had been preparing a full itinerary appealing to her interests, particularly women’s empowerment. But the plans fell through a week ahead of the Trumps’ expected visit to Seoul.

“We were notified last night that Ivanka may not visit Korea,” said a Korean Ministry of Foreign Affairs official Wednesday. “Something urgent came up so she is expected to attend the World Assembly for Women (WAW!) in Japan and seems to have to return to Washington right away.”

Ivanka Trump is scheduled to attend the 2017 World Assembly for Women, hosted by the Japanese government, in Tokyo on Friday, before her father’s arrival in the country on Sunday. She will deliver a speech at the event -- at the invitation of Japanese Prime Minister Shinzo Abe -- and is expected to discuss women's participation in the economy and women's entrepreneurship.

But she is expected to return to Washington straight from Japan without heading on to Korea and China to work on her father’s proposed tax bill, according to media reports.

Breitbart News on Tuesday quoted a White House official as saying that the president “asked several top officials” including Treasury Secretary Steven Mnuchin, National Economic Council Director Gary Cohn and Ivanka Trump “to stay in the U.S. and continue to push for comprehensive tax reform,” calling it the administration’s “number one priority,” while Trump is traveling across Asia.

The president kicks off his first Asia trip on Friday, visiting Japan, South Korea, China, Vietnam and the Philippines, as well as Hawaii, through Nov. 14.

Trump’s state visit to Korea, which includes a summit with President Moon Jae-in, a visit to Camp Humphreys, a U.S. garrison in Pyeongtaek, Gyeonggi, and a speech at the National Assembly, will take place Nov. 7 and 8.

The Korean, Japanese and Chinese governments have each been keen on appealing to Ivanka Trump’s interests, as she is an important line of communication with the U.S. president, and were including her in various meetings and events.

The Japanese government extended the three-day WAW! symposium, which kicked off Wednesday and was scheduled for two days, by one day to enable her to attend. She may stay in Japan through her father’s three-day trip to Tokyo which kicks off Sunday, which would mean she stays in the country for at least four days.

The Korean government pledged $10 million to Women Entrepreneurs Finance Initiative — or We-Fi, a fund managed by the World Bank to advance women’s entrepreneurship that has been championed by Ivanka Trump. It also set aside over 3 billion won in next year’s budget for this fund.

But plans to host a meeting between Ivanka and Korean female entrepreneurs from all walks of life fell through.

Ivanka Trump and Kushner sat next to Chinese President Xi Jinping and his wife during their visit to the Mar-a-Lago resort in Florida for a summit with President Trump on April 6. Ivanka Trump's fashion and jewelry company won provisional approval from the Chinese government for three new trademarks the same day.

President Trump, during his visit to Seoul, is not expected to visit the demilitarized zone (DMZ), the heavily-armed strip of land separating the two Koreas, a White House senior official confirmed Tuesday.

“The president is not going to visit the DMZ, there is not enough time in the schedule,” the official was quoted as telling reporters. “It’s becoming a little bit of a cliché, frankly.”