Moon has timeline for constitutional changes

Moon has timeline for constitutional changes 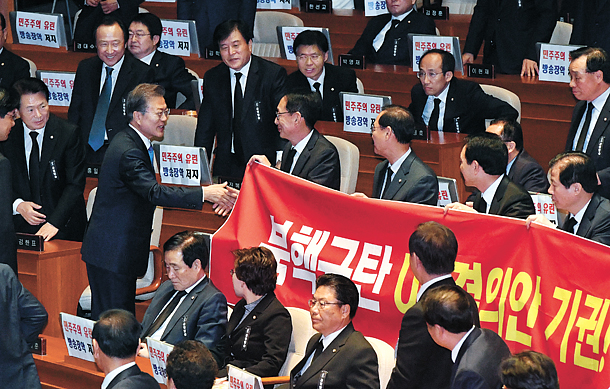 President Moon Jae-in shakes hands with lawmakers of the main opposition Liberty Korea Party on Wednesday while walking out of the National Assembly after he delivered an address on the government’s budget for next year. [YONHAP]

President Moon Jae-in on Wednesday reaffirmed his vision to amend the Constitution to strengthen regional autonomy and decentralize power and presented a timeline to the National Assembly by proposing a national referendum on the change next June.

Moon delivered an address at the National Assembly on the government’s budget proposal for next year, introducing the largest-ever 429 trillion won ($385 billion) budget bill. In the speech, Moon also addressed other political issues and urged the National Assembly to revise the country’s Constitution and election system.

“To carry out constitutional reform is to uphold the will of the people,” he said. “It is necessary to expand the people’s basic rights in line with the changing times. For the balanced development of the capital area and provinces, decentralization and regional autonomy have to be enhanced.”

He said it would be best to pass a bill changing the Constitution and then hold a national referendum on the changes next June during local elections. “If we delay beyond that point, it will be difficult to establish a strong base of support for reform,” he said. “I ask that the National Assembly keep this timeline in mind in its deliberations.”

A constitutional amendment can be proposed by the president or the majority of the National Assembly. The amendment bill must be made public for at least 20 days. The National Assembly must vote on the amendment within 60 days of the public announcement. Passage requires two thirds or more support by the legislature. A national referendum will take place no later than 30 days after its passage. A majority vote finalizes the amendment and the change will take effect immediately.

Moon, however, did not mention the exact changes he favors - such as a new governing system to replace the current five-year single-term presidency.

“In addition to constitutional reform, I hope the National Assembly is also able to reach bipartisan consensus on electoral reorganization, so that Korea’s electoral system can be improved to faithfully reflect the wishes of voters,” Moon also said. “I strongly expect that reforms in both of these areas will lay the groundwork for national renewal, and my administration will do its part as well.”

The current electoral system is a single member constituency system, in which one representative is elected in each district. As of now, 253 of the 300 National Assembly seats are single-member district seats and 47 are proportional representatives.

Liberal politicians have pushed for other systems, such as a German-style mixed-member proportional representation system. They argued that the current system is disadvantageous to minority parties and political rookies and fails to accurately represent public sentiment.

An alliance has been made among the ruling Democratic Party, opposition People’s Party, Bareun Party and Justice Party to push for electoral reform. The conservative main opposition Liberty Korea Party opposes the initiative.

Moon also stressed that his government will remove unfair practices and false senses of privileges from all sectors of the economy and society. “This is what I call the elimination of deep-rooted evils,” he said, promising to move forward with reforms of law enforcement authorities such as the National Intelligence Service to regain public trust.

He reiterated his commitment to overhaul the prosecution and establish an agency for the investigation of crimes among senior public officials. “If the relevant bill is passed, I, the president, and my relatives will be the subjects of any investigation of the newly installed agency,” Moon said. “I look forward to working with the National Assembly so that the bill can be discussed and passed as soon as possible.”

Moon explained the details of his plan to operate a 429 trillion won budget next year. He urged opposition lawmakers’ support for his plan, stressing that many of the projects proposed are similar to the pledges of rival candidates during the presidential election earlier this year.

“This is a 7.1 percent rise over the current year, the highest annual increase since the global financial crisis,” he said. “It is our belief that fiscal spending should play a more proactive role in reviving the economy and improving people’s lives,” he continued.

“When drawing up the budget plan and tax reform bill for next year, the focus was placed on job creation, the increase of household income, innovative growth, public safety and security,” Moon said, explaining that 19.2 trillion won, 2.1 trillion won higher than that of this year, was allocated for job creation. “Concerning the administrative agenda my administration is pushing for, common pledges made during the last presidential election and national security issues, I request the National Assembly’s understanding and active cooperation in the interest of a larger cause,” he said.

It was Moon’s second address at the National Assembly. He made his first speech in June, shortly after he took office, to explain a supplementary budget proposal. While his first speech talked about fair distribution of wealth, Wednesday’s speech was more focused on growth. He talked about “income-driven growth” and “innovative growth.”

“Income growth for ordinary citizens constitutes the foundation of income-driven growth,” he said, explaining that the government increased the budget earmarked to increase disposable incomes of households. Child and elderly allowances were increased, he said.

A tax revision bill recently submitted to the National Assembly is also a part of income-driven growth, Moon said. It is designed to raise the income tax rate for super high-income earners and the corporate income tax rate for corporations with more than 200 billion won of taxable annual income.

“If passed, it is expected to further enhance assistance for low-income families, the middle class, micro-business owners and small and medium companies. It is desirable for the wealthy and conglomerates to pay more taxes; if they do, they will be held in greater respect by society.”

Moon also talked about the innovative growth, a new but main agenda of the economic policy. “The government will invest a total of 1.5 trillion won into the development of core convergence technologies in preparation for the Fourth Industrial Revolution,” he said.