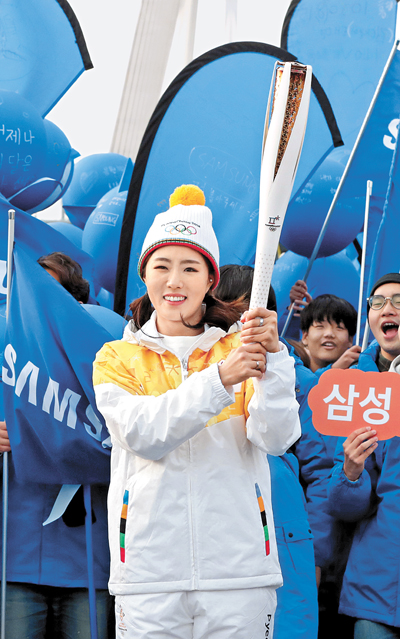 The two-time Olympic gold medalist Lee Sang-hwa, who became Korea’s first female skater to medal at the World Championships in 2005, became a torchbearer for the PyeongChang 2018 Winter Olympics on Wednesday, walking with 200 “Samsung Dream Class” students and giving a speech titled “Do What you Can.” 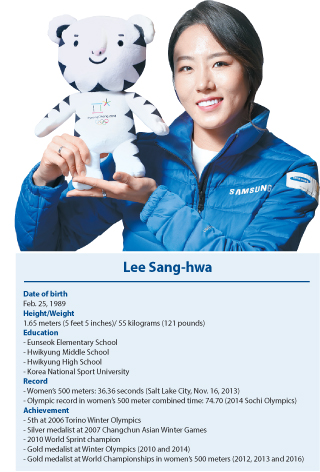 “No matter how difficult a situation you’re in,” she said, “set a goal and challenge yourself. Don’t give up.”

Since she was little, Lee has dreamed of two things - being a torchbearer and walking in the opening Olympic ceremony holding the flag. Despite three Olympic participations, Lee wasn’t able to walk at the opening ceremony, as speed skating was the first Olympic event.

Until the 2014 Winter Olympics in Sochi, Lee participated in a total of three Olympics. Aside from a fifth place finish in Lee’s first Olympics in 2006, she won gold medals in two consecutive Olympics in the women’s 500 meter race, becoming Korea’s first winter sport athlete to do so.

“Four years ago in Sochi, when I saw fans cheering and screaming at Russian skaters, I thought I’d be able to experience that in four years,” Lee said. “I’m just excited to give joy to the fans. I train everyday picturing that moment.”

Though Lee thought about quitting her sport multiple times, especially after the 2010 Winter Olympics in Vancouver, she never did.

“If the Olympics weren’t held in Pyeongchang, I would have retired right after the Sochi Olympic,” Lee said. “It’s an honor to play in the Olympics at host country. And it’s a great pleasure receiving this much cheer from the fans.”

Since July, Lee has been training by herself in Calgary, Canada, with Kevin Crockett, who had been with her for the two previous Olympics. It was a tough off-season training schedule, but she’s been following it religiously.

Coming from what could have been the worst season for Lee, not winning a gold medal in any of the Audi ISU World Cup series in the 2016-17 season, she is more determined than ever. She failed to maintain her top spot in the women’s 500 meter race, continuously losing to Nao Kodaira of Japan, who beat her in the ISU events and at the 2018 Asian Winter Games in Sapporo, where Lee won silver.

“It was the most difficult time since I started speed skating,” Lee said. “But through failure, I learned a lot.”

Throughout the season and her career, Lee’s knee has been a problem. Worse, last season Lee suffered from a calf injury and varicose veins.

“My calf hurt so much that I wasn’t aware of the knee pain,” Lee said. “In short distance races, the start is the most important part, but at times, I couldn’t move my legs.”

After suffering a season of injuries, Lee finally underwent calf surgery in March, and already, she is seeing progress.

And right after winning the national team trial in October, Lee said, “I will challenge myself to set a world record before the Olympics.”

As of now, her goal is to finish her race with a time in the mid-36 seconds in the first two Audi ISU World Cup races. Then she plans to improve for the last two races before the Olympics. Currently, Lee holds the world record at 36.36 seconds, set during the World Championship in November 2013 at Salt Lake City. Lee said, “The most important thing to me is the PyeongChang Olympics.”