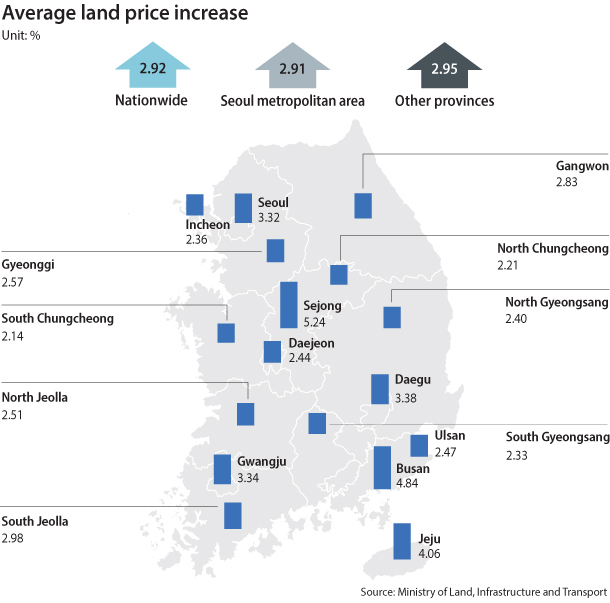 Busan has experienced one of the sharpest land price increases so far this year thanks to heavy development in popular tourist areas like Haeundae Beach. The city of Pyeongtaek in Gyeonggi has also seen a significant boost with the relocation of the U.S. Army there, according to the latest figures from the Ministry of Land, Infrastructure and Transport.

The average price of land in Busan rose 4.8 percent in the third quarter this year compared to last year, the ministry revealed Thursday. It was the second-highest increase among Korea’s major cities and provinces.

Sejong topped the list as land value there rose 5.2 percent. Jeju trailed behind with 4.1 percent. The rise of Busan is significant because Sejong and Jeju have traditionally been the hot spots for developers.

Seoul, on the other hand, has trailed in growth, with land prices increasing just 3.32 percent, slower than Daegu’s 3.38 percent and Gwangju’s 3.34 percent.

When broken down by district, the influence of Busan is even clearer. The popular beach area of Haeundae saw the sharpest increase among districts in the country, growing 6.9 percent. Some neighborhoods in Haeundae District even saw land prices rise more than 8 percent.

The city of Pyeongtaek in Gyeonggi, where the U.S. military is relocating, also saw a sharp increase in its land value, rising 5.8 percent.

Although land prices went up compared to a year ago, they dipped slightly compared to the second quarter, largely due to tougher real estate regulations announced in August as part of government efforts to rein in an overheated market.

“Until the third quarter this year, there has been a continual increase in investment of residential and commerce real estate, thanks to low-interest loans,” the ministry said in a statement. “But since August, that rate has been slowing down.”