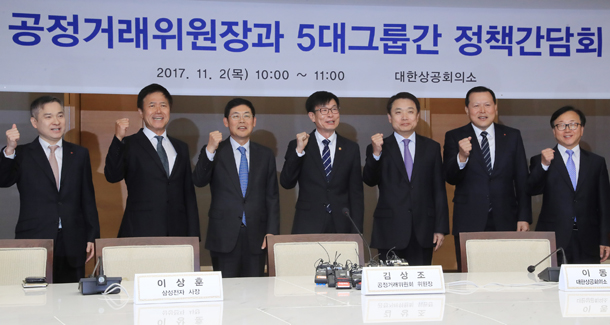 The head of Korea’s antitrust regulator warned top conglomerates on Thursday that the agency would look into their charitable foundations and holding companies for any signs of mismanagement.

During a meeting with senior executives from the nation’s five largest conglomerates - Samsung, Hyundai Motor, SK, LG and Lotte - Kim Sang-jo, chairman of the Fair Trade Commission, questioned the companies’ willingness to pursue corporate reform and transparency. It was Kim’s second meeting with conglomerate executives since he took office in June.

A former economics professor and activist, Kim is known for his strong stance against the country’s powerful conglomerates, also called chaebol. His outspoken views have earned him the nickname “chaebol sniper.”

The chairman started the meeting by thanking businesses for their better-than-expected earnings performance under difficult circumstances.

But he immediately turned to criticizing the companies for their passive attitude toward corporate reform and blamed them for the public flak that the government has been receiving for its lackluster results.

“I am confident that the voluntary efforts of shared cooperation by businesses, particularly led by the top five conglomerates, is the most effective approach in creating predictable and sustainable reform,” Kim said. “It takes time for the will and effort to lead to actual results, and such suspicions and criticism can happen in the process of change.

“But,” he added, “there should not be a gap between the market and society’s response to companies’ strategies. I ask that you make effort with more speed and detailed strategy so that the public can actually feel the changes that businesses are making.”

The chairman then laid out some of the work that the Fair Trade Commission’s corporate department, which was newly created to investigate big businesses, plans to do.

First, the department will look into the management of conglomerates’ charitable foundations. It will investigate whether these foundations are run according to their founding objectives. In the past, such organizations have been accused of funneling money into other purposes like boosting personal coffers.

The commission department also plans to look into the profit structure at holding companies.

“Holding companies’ main income should be the dividends paid out by their affiliates,” Kim said. “However, it seems in reality that other income sources like brand royalties, consulting fees and office rent are taking up a large portion.”

The Fair Trade Commission will look for any illegal transactions in the profit structure, such as holding companies commissioning large amounts of work to affiliates.

“The final goal is to collect all of the companies’ public filings, industry reports and investigation reports, and turn them into a meaningful database so that [the commission] can use it to come up with proposals and recommendations that will later turn into corporate policies,” Kim said. “It is my thought for creating a fair market order that will not be shaken by sentimental or political demands, and creating a more effective corporate structure.”

He said businesses that abide by the law and cooperate with smaller business partners should have nothing to worry about.