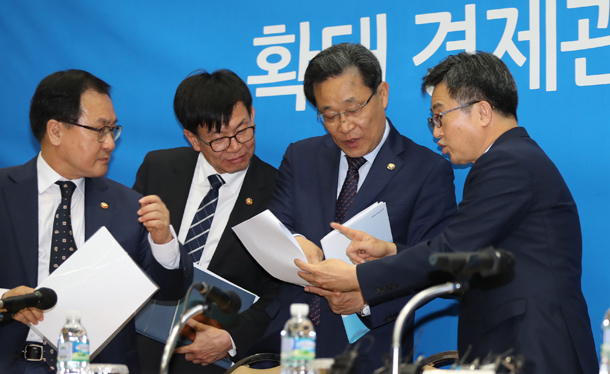 The government announced plans on Thursday to create a 10 trillion won ($9 billion) venture capital fund and expand tax benefits for investors of start-ups in its latest push to support emerging tech companies.

The fund will be allocated to high-potential start-ups over the next three years. In a separate initiative, state-owned financial institutions will distribute low-interest loans worth a total of 20 trillion won to help entrepreneurs build up their businesses.

President Moon Jae-in’s administration hopes the injection of cash will create another tech boom like the one the country experienced in the late 1990s and early 2000s. The plan is in line with the president’s promise to support small and medium-sized enterprises.

“We will foster a second boom led by the private sector through the development of innovative start-ups,” Finance Minister Kim Dong-yeon said after a meeting with heads of other government agencies at Soongsil University in southern Seoul.

The tax breaks include exemptions on stock options of less than 20 million won. The announcement was jointly made by the Ministry of Strategy and Finance, Financial Services Commission, Ministry of SMEs and Startups and Fair Trade Commission.

The government will also raise tax deductions for investments in start-ups.

Currently, no taxes are levied on investors who contribute less than 15 million won. Under the new plan, the ceiling will rise to 30 million won.

Those who invest between 30 million and 50 million won will get a 70 percent deduction compared to the current 50 percent rate.

The government also plans to double subsidies for small mid-stage tech companies. “Companies that have been around for five to seven years usually face challenges,” said Byeon Tae-sup, director general at the start-up policy division of the SMEs Ministry. “Currently, the subsidies set for the companies stand at 50 billion won, but we will double the size going forward.”

To encourage more venture capitalists to invest, regulators will lower the minimum capital required to set up a VC firm from 5 billion won to 2 billion won.

In addition to financial support, the government said it will encourage companies, public institutions, schools and state-owned corporations to rehire workers if they want to come back after pursuing their own start-ups.

“When it comes to private companies, we can’t hold them accountable for not following that,” Byeon said. “But we can incentivize companies through subsidies and other measures.

“We found a few companies are actually interested,” he added. “Of the 2,000 companies that we surveyed, 300 said they intend to participate in it.”

Separately, the Ministry of SMEs and Startups recently selected 48 venture capital firms to build and manage a 1.4 trillion won fund that will finance start-ups specializing in so-called fourth industrial revolution technologies like robotics, big data, artificial intelligence and the Internet of Things.